After years of waiting, we finally have a good solution for the dreaded screen tearing: Adaptive sync technologies. Companies tried to solve this with V-Sync before, but it came with its own set of problems. And after Nvidia’s G-Sync technology came out, AMD did not wait to join the competition and released FreeSync soon after. But how do these two compare? What the differences, pros, and cons?

First, let’s talk about what screen tearing is. While playing video games, your computer tries to create as many frames per second (FPS) as possible. But your monitor has a set refresh rate, 60Hz for example. This means your monitor refreshes the screen 60 times per second.

There is no problem when your computer matches this and creates 60 FPS but when there is a mismatch, what we call “screen tearing” happens. This causes the next image to come on top of the current image and creates horizontal lines that separate the images.

It is probably the most annoying thing after having sub-30 framerates. V-Sync tried to combat this, but since this option tries to solve screen tearing by commanding the last image to wait for the new image, it usually ends with more input lag and stuttering.

Adaptive sync solves this by using a very simple idea: It matches your monitor’s set refresh rate with your current FPS. If you are running the game with 45 FPS, your monitor will run at the 45Hz refresh rate. Simple, yet very effective. Once you play a game with it, you cannot go back. 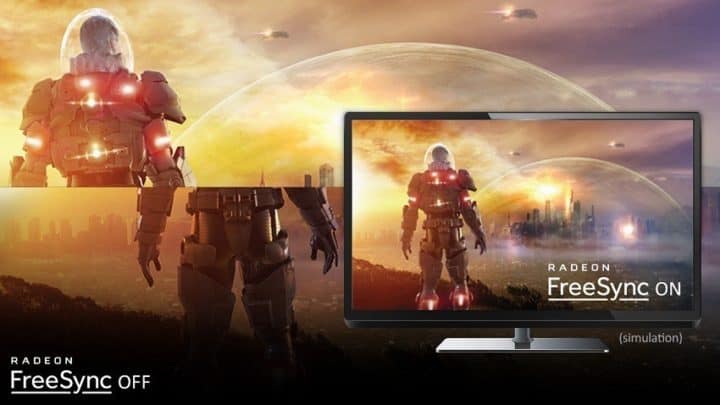 AMD uses the Adaptive-Sync open standard in DisplayPort 1.2a and later versions. Since it does not require a proprietary module like Nvidia’s G-Sync, it is much more affordable.

AMD also does not charge licensing fees to manufacturers, so FreeSync exists in a much broader range of monitors and they are cheaper. This is FreeSync’s strongest point and for this reason alone, a lot of gamers on a budget go for AMD options. Especially after AMD managed to implement FreeSync over HDMI, our options became even broader.

FreeSync monitors also have many more options when it comes to connectivity. FreeSync monitors tend to have a full selection of ports. G-Sync displays are usually limited to DisplayPort and HDMI only since G-Sync module restricts the outputs which a G-Sync monitor can support.

This comes with a cost, though. Monitors that have FreeSync technology usually have a narrower frame-rate range. Anything lower than the lowest limit will cause FreeSync to stop working and you will start experiencing screen tearing again.

To combat this, AMD launched a new feature called Low Framerate Compensation (LFC). Monitors with LFC duplicate frames when FPS is below the FreeSync lower limit, enabling it to enter the FreeSync range. But this means more features to look for when searching for FreeSync monitors.

To see whether your AMD GPU supports FreeSync or not, go to AMD’s FreeSync page to see the full list of supported graphics cards. 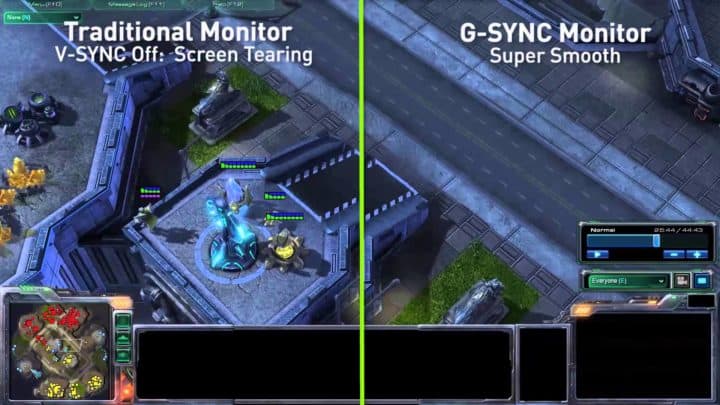 Nvidia is much more strict about their approach to adaptive sync. They work closely with display manufacturers during the development and these manufacturers need to pass the certification process. Also, Nvidia charges monitor makers for the chip that handles the G-Sync and this is reflected in prices. Also, the narrower selection of inputs can turn off some users.

Nvidia makes up for these cons, though. Every G-Sync monitor supports the equivalent of AMD’s Low Framerate Compensation, so you will not have to look for it separately. All G-Sync monitors also have “frequency dependent variable overdrive” which prevents ghosting on G-Sync displays. Ghosting is another significant problem gamers face, especially with monitors with higher response times.

Plus, some of the monitors that have G-Sync include Ultra Low Motion Blur, which effectively combats motion blur at very high refresh rates. It is really useful in competitive gaming where extremely high refresh rates are used. You can’t use G-Sync and ULMB concurrently, though.

While there are some important differences, both G-Sync and FreeSync work relatively the same, and the choice is up to you. If you already own a strong graphics card, you will go for that company’s adaptive sync technology anyways since neither works with its rival’s graphics cards. Nvidia owners need a G-Sync monitor, and AMD owners need a FreeSync monitor.

If you are a gamer on a budget, it would be smarter to go for AMD’s FreeSync. You can check our guide to make a Gaming PC under $500.

However, if you do not care about the monetary aspect, it really does not matter that much. Even though G-Sync monitors usually make up for their higher price with generally better performance, if you do enough research and find a FreeSync monitor with LFC and wide refresh-rate range, you can achieve the same experience with G-Sync.

If you are a competitive gamer who plays games on extreme refresh rates like 240Hz, Nvidia’s ULMB can convince you to go for G-Sync. No matter what you choose, after you have used a Gaming monitor with either of these two technologies, you will be amazed and won’t want to go back!

Ahmet has been passionate about video games since he was 4 years old and has been writing about them for the last 10 years. He was accepted to Turkey's best selling gaming magazine LEVEL as a freelance writer when he was 13. He is still playing video games and following the media regularly with great enthusiasm. Follow him on Twitter @ahmetbabacanpl