Darkest Dungeon, by itself, is a great game. It’s definitely one of the best roguelikes in the past few years, with plenty of things to do. But just like with any other game, things can always be better. That’s why we have a list of some of the best Darkest Dungeon mods for you.

We have something for everyone. From gameplay mods that will add new things to the game itself, to skins for the characters and even new classes. Regardless of what aspect of the game you want to customize, we’re sure we have something that’s just right for you. You can also look on the Nexus mods Darkest Dungeon page.

Let’s see what the best Darkest Dungeon mods are and why you want them.

Given that Darkest Dungeon is one of the best games of 2016, you may want to keep things as vanilla as possible. UI Enhancement allows you to do that, and still benefit from it. What it does is it gives you way more details about everything. If you’ve ever wondered what effects certain actions may have, this mod will let you find that out easily.

If you want to change almost everything about the game, from the UI and enemies, to the inventory and heroes, Maester Silvio’s Pitch Black Dungeon is the way to go. It does make everything different, and adds an interesting quirk. The first quest isn’t a quest, but a scripted tutorial test. The developers of the mod put it in place to demonstrate exactly what is different from the vanilla game. If you haven’t played the vanilla game, or don’t remember everything exactly as it was, this will help you get started. It’s an excellent mod for those who’d like something different.

As is the case with many other similar games, PC games often only give you PlayStation 4 button prompts. Even though translating them into their Xbox One equivalent isn’t rocket science, why would you bother with that? If you’re the kind of person to prefer playing Darkest Dungeon with an Xbox controller instead of the traditional mouse and keyboard, you’ll want this mod. Basically, it will add Xbox One button prompts. Without it, you’re forced with PlayStation 4 ones, which is a bit inconvenient. Sure, it isn’t life-changing, but it does help.

Inventories can be a pain to manage, and Darkest Dungeon isn’t an exception to this. A big issue is that you can’t stack items such as firewood or quest items. If you hate that this is the case, you’re not the only one. Maester Silvio strikes again here, with his Stacking Inventory mod. With it, you can stack gems, quest items and supplies. Jute Tapestries and Trapezohedrons stack to 2, Pews stack to 3, quest items all stack to 3, Firewood stacks to 5 and Dog Treats can stack to 8. It may not be too much, but it’ll make your inventory a better place. 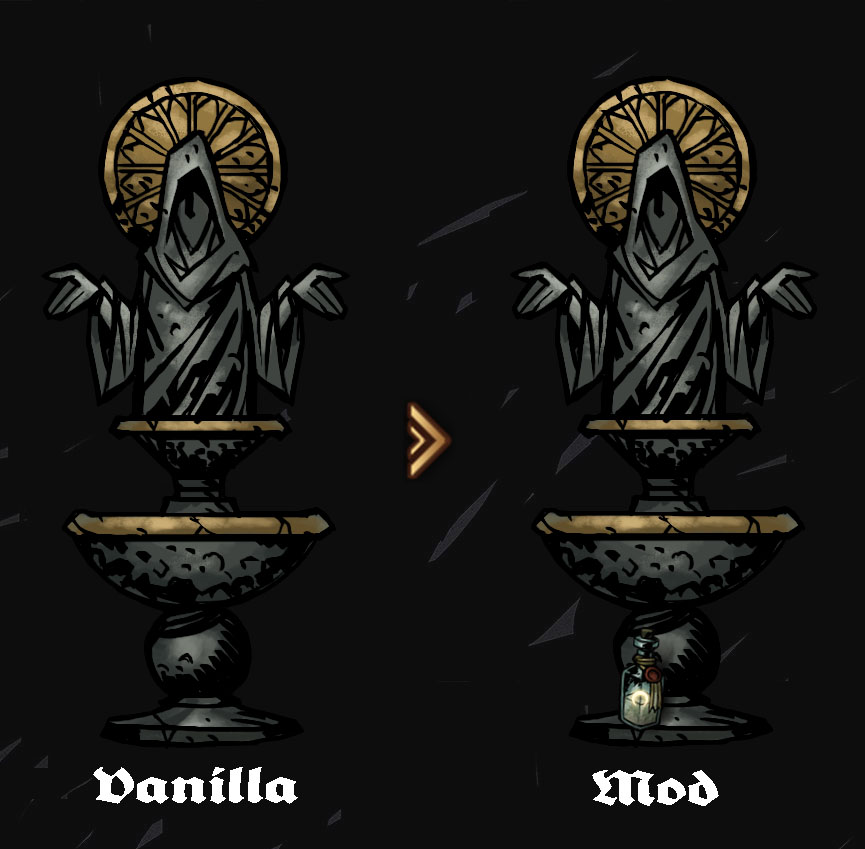 One of the reasons why we all enjoy a difficult game is because it’s challenging and makes the rewards so much more worth it. But there are some aspects of difficulty in a game that aren’t contributing to the challenge and are simply an annoyance. To many players, bad Curios that take a hit on your health are one such annoyance.

This mod gives you a tiny clue about which item to use on the curio sprite itself when you encounter it. However, if you don’t see an item at all, this could mean two very different things. One possibility is that you don’t need to use an item at all. Another is that this curio is a bad one and will be better for you if you avoid it. 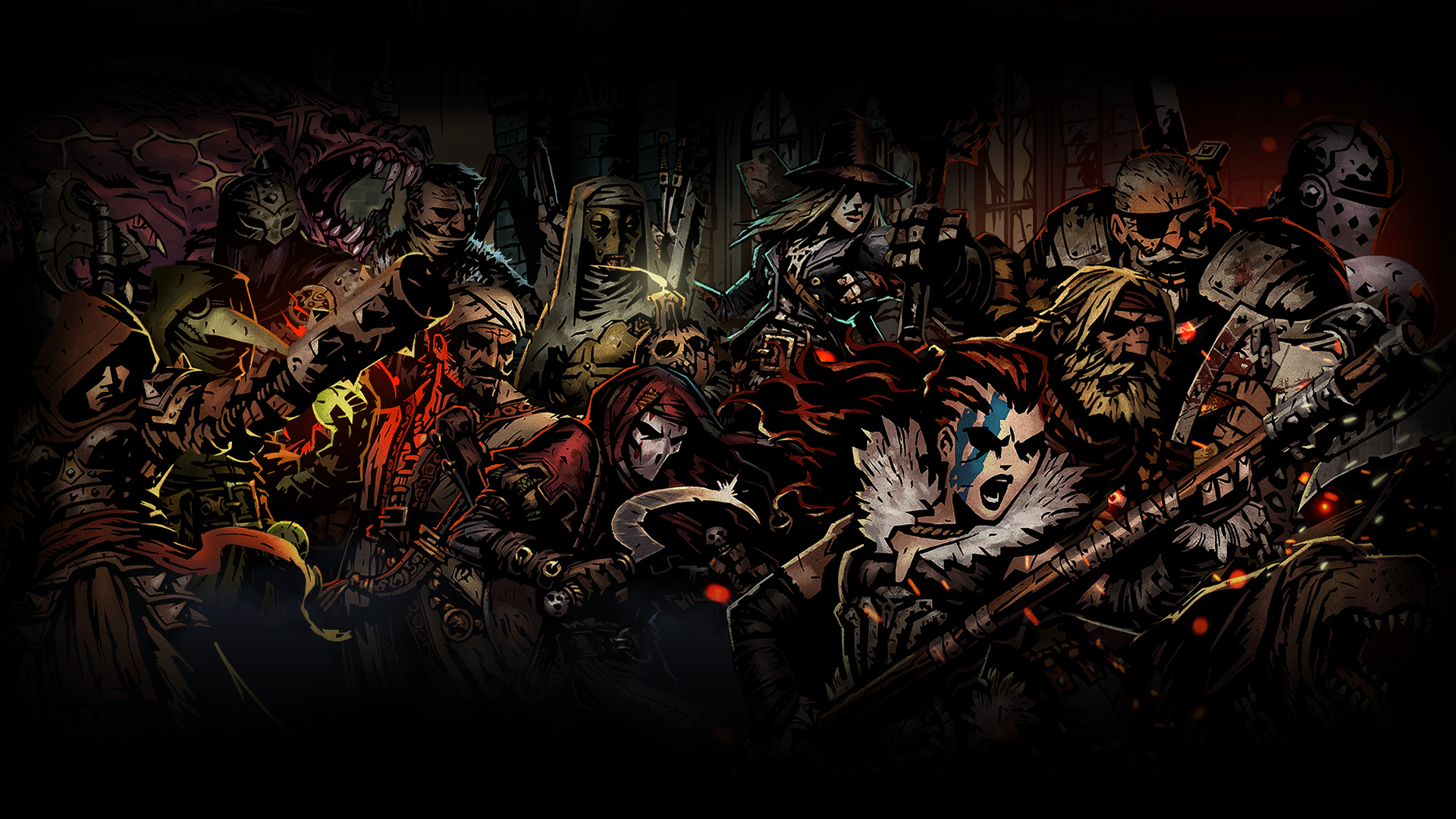 Of course, no loading time or no loading screen is always the preferable mod, but that’s not possible all the time. This modder definitely soothes the wound by creating epic loading screens so that you’re distracted by admiring the artwork rather than clicking in impatience.

The town loading screen is constant, and it features all of the characters in an epicly depicted battle fight. The rest of the loading screens are specific to the dungeon you’re about to enter.

It adds an element of minor excitement to the game, especially if you’re playing it the second time around; since you look forward to seeing what the loading screen looks like this time. 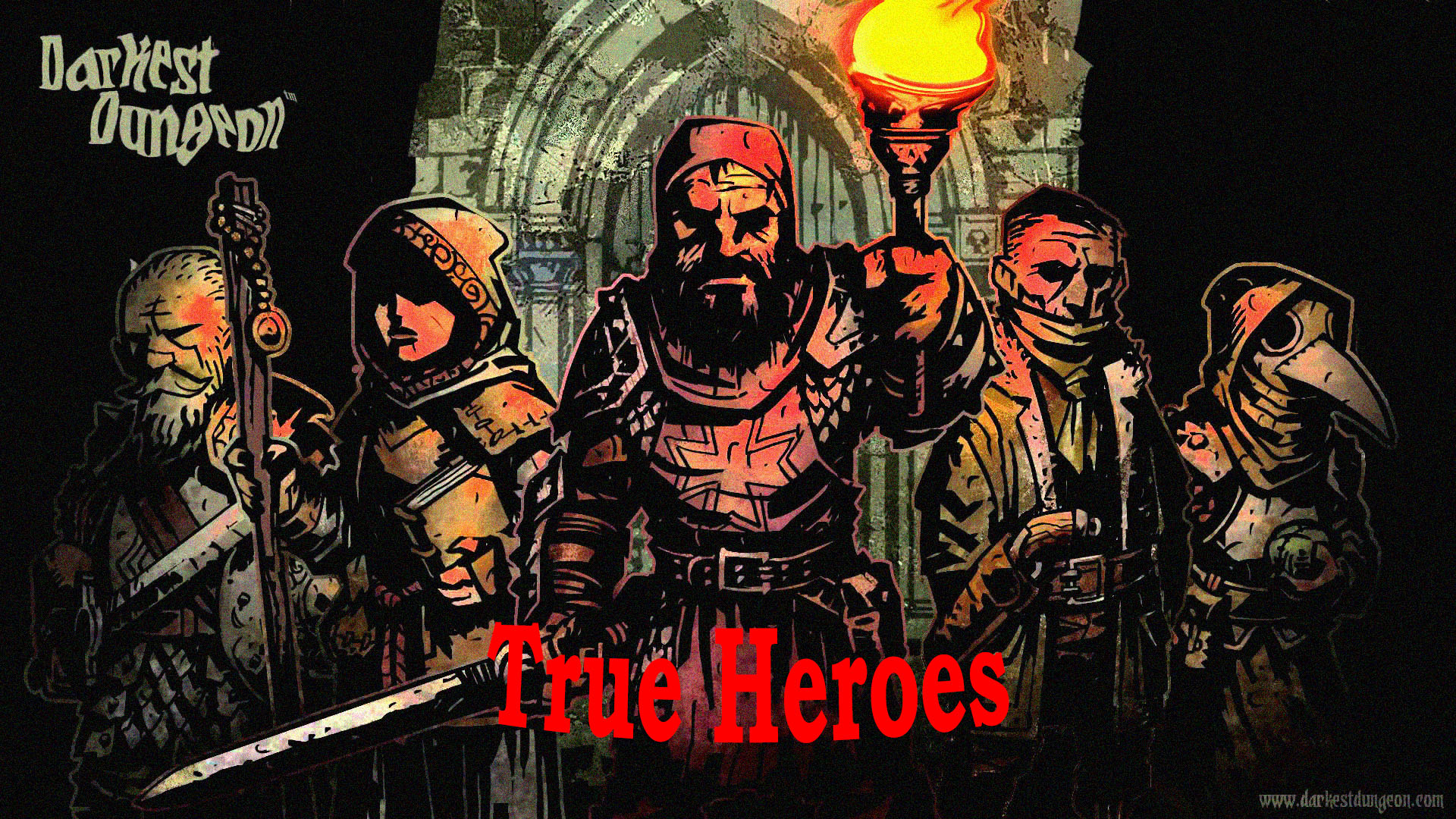 There’s nothing more heartbreaking than losing your heroes while playing Darkest Dungeon. The sad part is that it is almost inevitable to lose some of them since a large part to play in whether they succeed or not is to do with sheer luck. This mod gives all the heroes a fair chance to play and guarantees that if you play well, you will be able to complete every quest without losing one of your heroes.

It does this by rebalancing the inner points system of the game. Now there is a higher focus on tactics and strategy. There’s increased resistance for the heroes, as well as their HP. It doesn’t make the game too easy, you still can lose your heroes if you play badly: but atleast its more within your power this time. 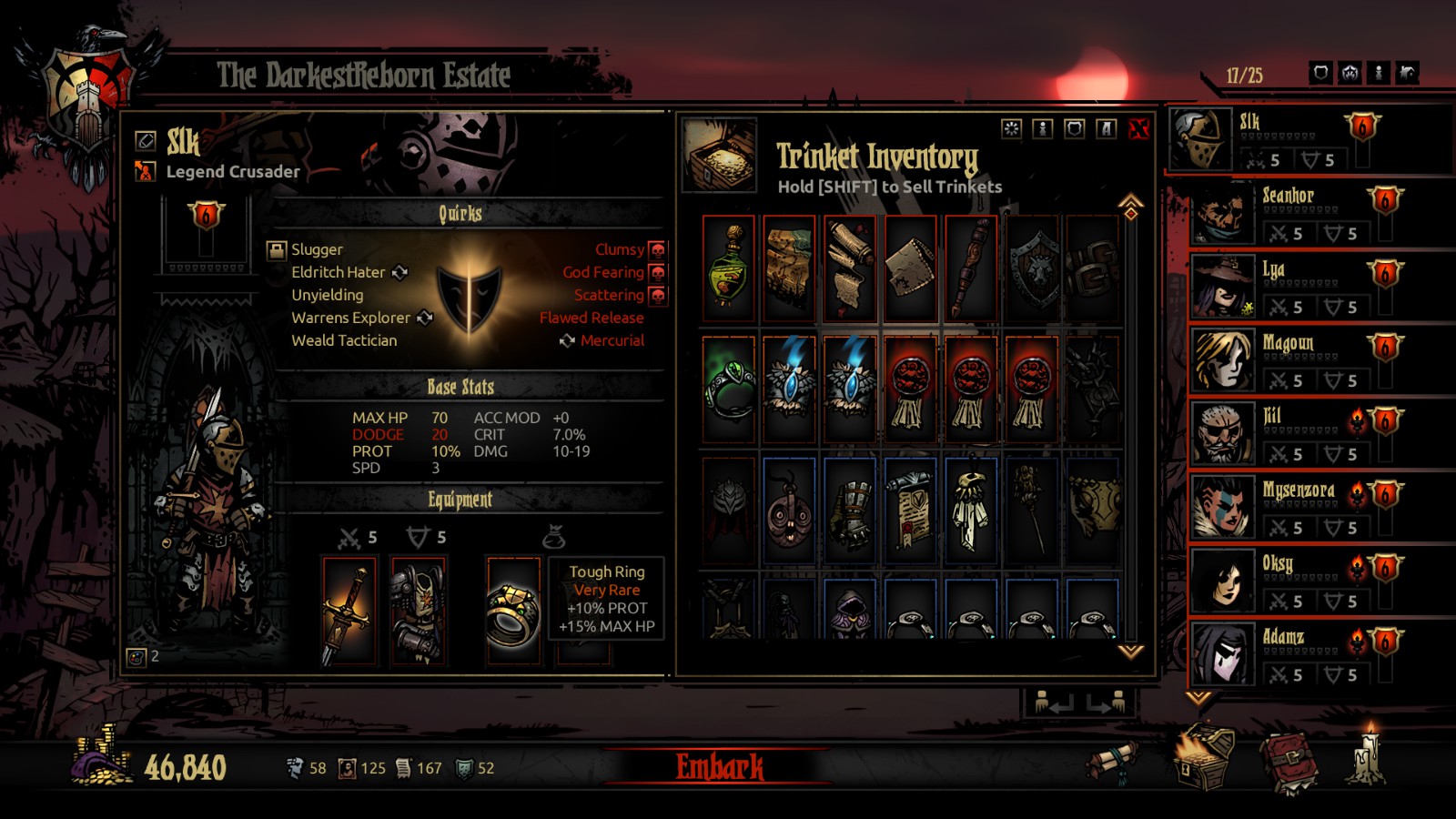 If you’re happy with the excitement of the vanilla game’s unpredictable hero slaying, but still want the game to be a little easier to play: Better Trinkets is a good mod to accomplish that. What it does is take away all the negative statistics from all trinkets. This means that all the trinkets you collect are good.

You can collect as many trinkets as you want from dungeons or battling certain enemies: as long as your inventory isn’t full, after which you cannot collect any more. You can also loot a trinket from any other character that falls in battle.

When you don’t like the way a certain character looks, a skin is the way to go. With this mod, the Highwayman will look like the Bloodborne Original art. Even though this doesn’t do much in terms of gameplay, it certainly does make the aesthetics a bit more interesting. If you’re a Bloodborne fan, installing it is a must.

Dark Souls is a very popular game series, and many of the game’s players also play Darkest Dungeon. Willydamn, the developer of this mod, also developed the Bloodborne Highwayman skin. The Crusader skin, as the name suggests, will change the Crusader character in the game. The result? It’ll look like the character from the boxart on Dark Souls II. Considering how awesome the boxart characters are, this is a great thing. Now, just like the Bloodborne Highwayman, or any of the following character skins, this won’t do anything to the gameplay, but it just makes the game’s aesthetics that much better.

The Witcher III is another extremely popular game nowadays, especially among the fellas that play Darkest Dungeon. This is exactly why the Geralt skin is on our list of best mods for Darkest Dungeon. It’s actually a very extensive effort, one that pays attention to all the possible details. To begin with, it does look exactly like Geralt. Second, Hunter’s axe is replaced with a silver sword – Geralt’s weapon. Oh, and when you get attacked, you’ll see the Quen sign. If you’ve ever wanted to do something that’s purely visual but goes into as much detail as humanly possible, this is the mod for you.

If you want to add a class that’s similar to Crusader, the Warden is an excellent choice. To begin with, you can deal damage to enemies. At the same time, you can use her multiple banners and produce different effects. For example, the first banner will lower the Protect and Dodge of your enemies. The second one will destress and buff your allies. The third will give one of your teammates a small healing effect. Overall, it’s an interesting class, one you could give a shot to.

Even though there’s nothing elegant about it, the Pit Fighter is still an interesting character. It’s a big brute that’s made to demonstrate force as he attacks his enemies with nothing but his bare hands. It actually looks quite a bit like some of the human enemies you’ll encounter in various areas of the game, but unlike them, he’s on your side. Even though his creator does have a few other classes you could check out, the Pit Fighter is definitely his best effort.

The Revenant is, simply said, a tank. He’s such a tank that other characters that are heavy armored don’t really want to accompany him on quests. Why? They just don’t want to be out-tanked. Other interesting additions include the healing capability, as well as dealing attacks that will make his enemies bleed. Even though he’s not the best against the Undead, he is definitely one of the best options for a character that can lead the charge.

Initially, the Musketeer was merely a reskin of the Arbalest class. If you were a Kickstarter backer at a certain tier when Darkest Dungeon was still being crowdfunded, you would’ve gotten it. Sure, it did have its own story and its own descriptions, but the functionality was the same of the Arbalest.

But modder Androu1 made use of the skin’s art assets, developing it into a full-fledged class, and a great one at that. There are a few mods that do this, but Androu1’s was the only one worthy of being on our list of best Darkest Dungeon mods. The only downside is that you’ll need the Musketeer assets for it to work, and if you weren’t a Kickstarter backer, you’ll need to source them from somewhere else.

How to Install the Skins

Even though many games actually have community-made mod managers, with Darkest Dungeon, you’ll need to do things manually. You’ll also want to follow all the steps, because missing out on something may result in game crashes and unstable gameplay.

The first thing to do is to copy and paste the mod’s folder in the game’s installation folder. Almost everything will be taken care of with this, as the files are set up in such a way so that you don’t have to bother moving a lot of files.

However, the Effect file, found in the Scripts folder, is one that modders haven’t found a way to deal with yet. If you just copy this folder into the game, it will override the content, and chances are your game won’t run. Instead, you’ll want to open the Effect file of the mod with Notepad, copy the effect of the mod you want, and paste it in the game’s Effect file manually. This should do the trick and have you sorted.