We’ve collected the best Fallout 4 mods for gameplay enhancements, visual improvements, new weapons and gear, and more. As with all Bethesda RPGs, Fallout 4 is a game that is massively complimented by user-created mods and is a much stronger experience with a few tweaks, changes and neat little additions. Here we will run down 20 of the best mods you can find to make your post-apocalypse as pleasant as possible. What are the best Fallout 4 mods on PC? The mod community is out in force, so you have lots to choose from when looking to enhance your gameplay.

It’s important to note that although mods are available for the console versions of Fallout 4, Sony does not allow their modders use external assets and so some of these mods are not available on PS4 (sorry!).

We have also compiled some of the best Minecraft mods of 2018 & best skyrim special edition mods right now. Check this

Looking for graphics mods, UI mods, weapon mods or settlement mods? We’ve gathered a list of the best Fallout 4 mods for PS4, PC and Xbox one with Download Link.

Sometimes your character something you completely did not intend. This is because of Fallout 4’s paraphrased dialogue system, which only gives you a rough idea of what each dialogue option is saying instead of the full line. To avoid any confusion, and just to be crystal clear what you’re saying, The Full Dialogue Interface mod brings the game back to the Fallout 3 way of doing things. A very nice mod for players who found the inaccurate dialogue trees to be occasionally baffling.

Dogmeat is everyone’s favorite nuclear wasteland dog. Obviously. We didn’t need to clarify that, but as a companion he can be a little underwhelming, particularly in combat. This mod allows you to have an extra companion following you and keep Dogmeat by your side. He has his benefits, but he sucks in combat. This mod allows you to keep those benefits without missing out on some helpful combat aid.

Alternatively, you could just make Dogmeat stronger in combat. This mod does exactly that. Dogmeat will no longer put out a meager 1-2 dps to your foes, he will now do 58 dps. Now there’s a Good Boy.

Although Fallout 4 is a more vibrant game than 3, there’s no doubt that after dozens of hours in the wasteland you may start to get tired of all the greys and browns. SimpleSeasons brings some life back post-apocalypse Boston. This mod will turn the wasteland into a snow-coated landscape, a lush and green beauty, a Summer blend of orange and yellow leaves, or an autumnal array of leaves about to fall off their trees. Be sure to download the four versions of this mod, each reflecting the four seasons, to experience the wonderful variety this mod has to offer.

Any Mod Any Weapon

Fallout 4 limits what you can do to change and improve your weapons. Not all mods will fit on all weapons, which does make a certain degree of sense, right? This mod throws logic out of the window in the pursuit of chaos. Ever wanted to shove a Deathclaw’s hand into a boxing glove, or create a pistol that can fire cannon balls? Then this is the mod for you. Go nuts, and see what crazy new weapons you can create with this truly sandbox mod. 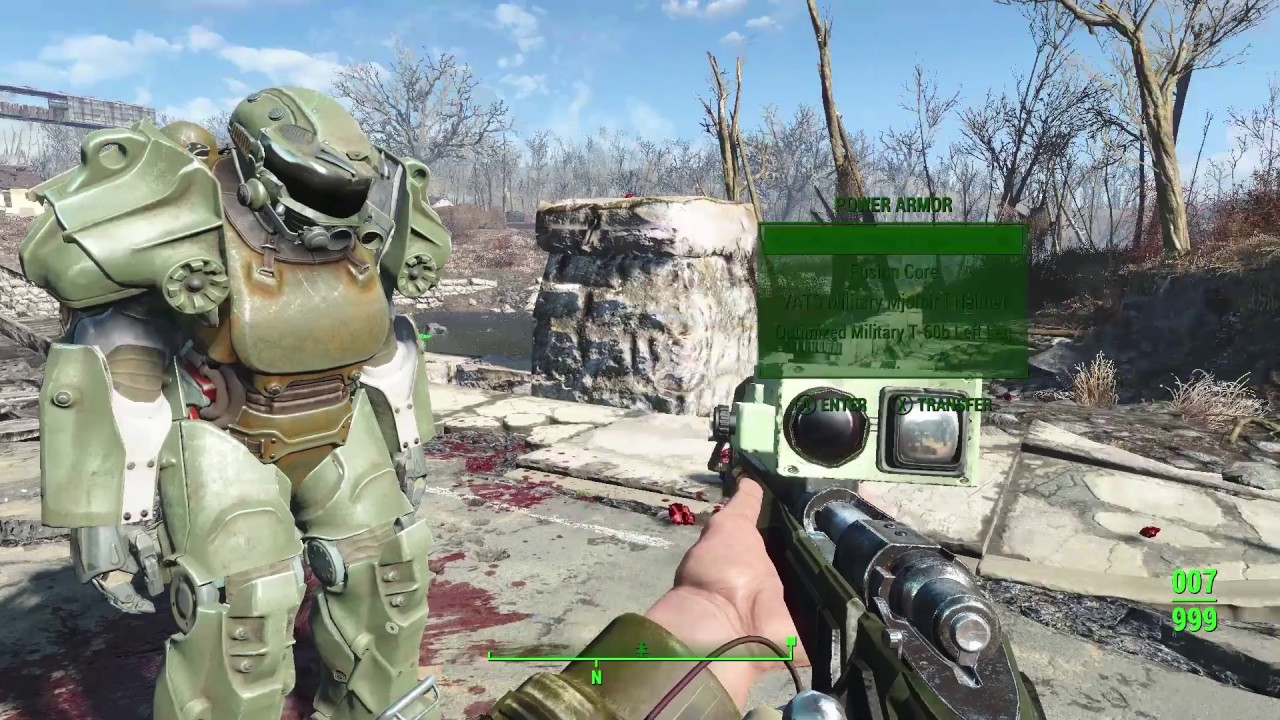 A neat little mod that allows will switch to first-person when you aim-down-sights and switch back when you stop, just like Metal Gear Solid. A cool mod for players who like to switch perspectives frequently.

Intimidating is a fun thing to do, I’m sure I’m not the only one who thinks that, right? Point your gun at someone and make them do your bidding. Good stuff. But it’s also pretty limited in Fallout 4. This mod adds a number of new things you can do with intimidation, such as shaking them down, putting them in handcuffs, or making them run away. A nice mod that makes intimidation a bit more interesting.

A neat little quality-of-life mod that adds roads to the map to help you get about a bit easier. If you prefer to stick to the roads, this mod is for you.

The True Storms mod adds a bit of chaos to the wasteland and makes it feel more like a nuclear wasteland rather than just a regular old apocalypse-stricken world. This mod adds radioactive rain, heavy fog, heavier rain, dust storms, and more.

Add a little Pokemon to your Fallout with this beast-capturing mod. Not only does this mod allow you to capture beasts and use them as companions, it also lets you customize them and dress them in armor, put trackers on them so you don’t lose them, manage their happiness by feeding them treats, and more. There’s plenty of powerful creatures in the wasteland, why not use them to your advantage?

Tired of the same old start? Played Fallout 4 several times and looking for a different and quicker way to start the game? Alternative Start allows you to start as someone other than the Vault Dweller. Start as a citizen of Good neighbour, a raider or merc for hire, a passenger aboard a sinking ship, a member of the Church of Atom, and more.

This neat little quality-of-life mod makes it easier to place objects onto other objects, making it much easier to decorate your settlements and keep things looking nice and tidy. A must-have if you’re into the building stuff in this game.

It may not bother everyone, but personally, I always found it a little weird when your character talks to people with his/her gun pointed at them always felt unnecessarily menacing. This mod gives you the option to lower your weapon and quit being such a jerk.

This mod allows you to expand your weapon modding to the next level and create something truly powerful. Create and attach an attribute from legendary weapons or armour to any weapon you want. Some of these attributes are pretty strong so experiment away and see just how powerful you can make that hunting rifle! 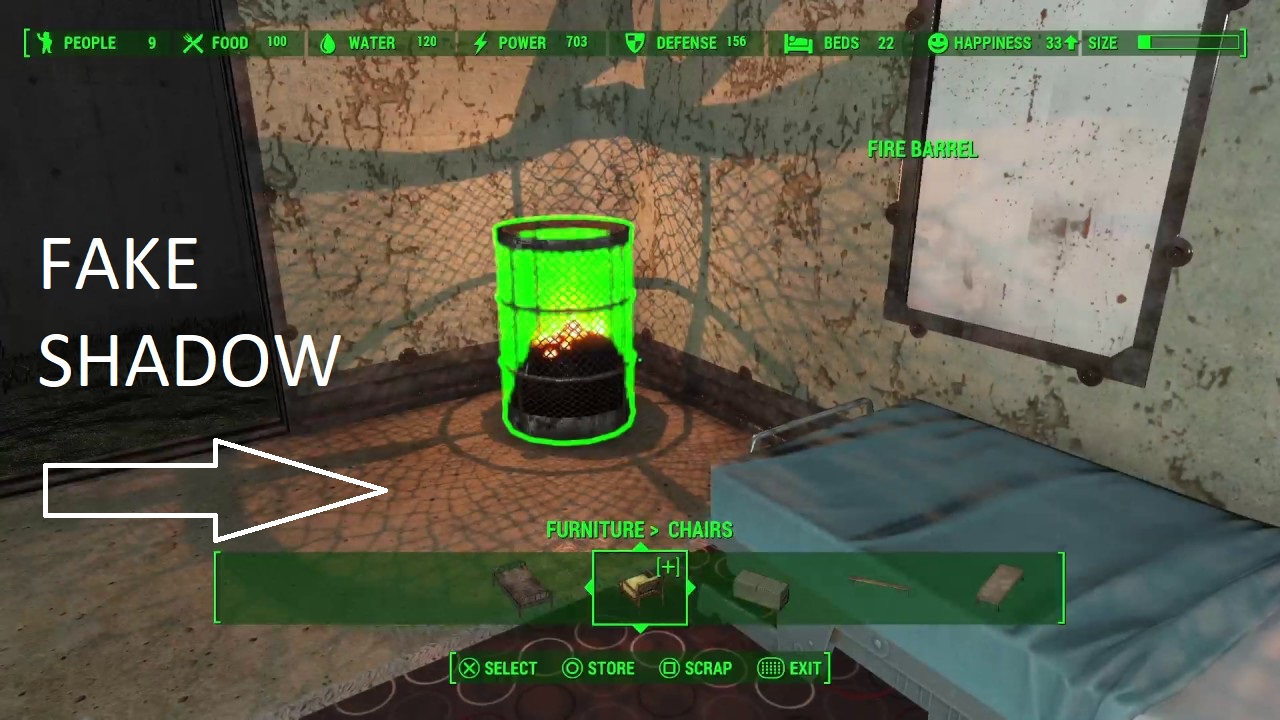 If Fallout 4 is not running as fast as you’d like it to, and you’d like to boost the performance, this mod will come in quite handy. When most mods are trying to improve on graphics, this mod actually degrades it. Dynamic shadows are a very GPU hungry component of any game.

Eliminating this aspect means that you get static shadows that are not specific to every indoor flickering light source — and much faster performance. Keep in mind that this mod alters all indoor light sources. It doesn’t alter the shadows created in outdoor settings by the sun! 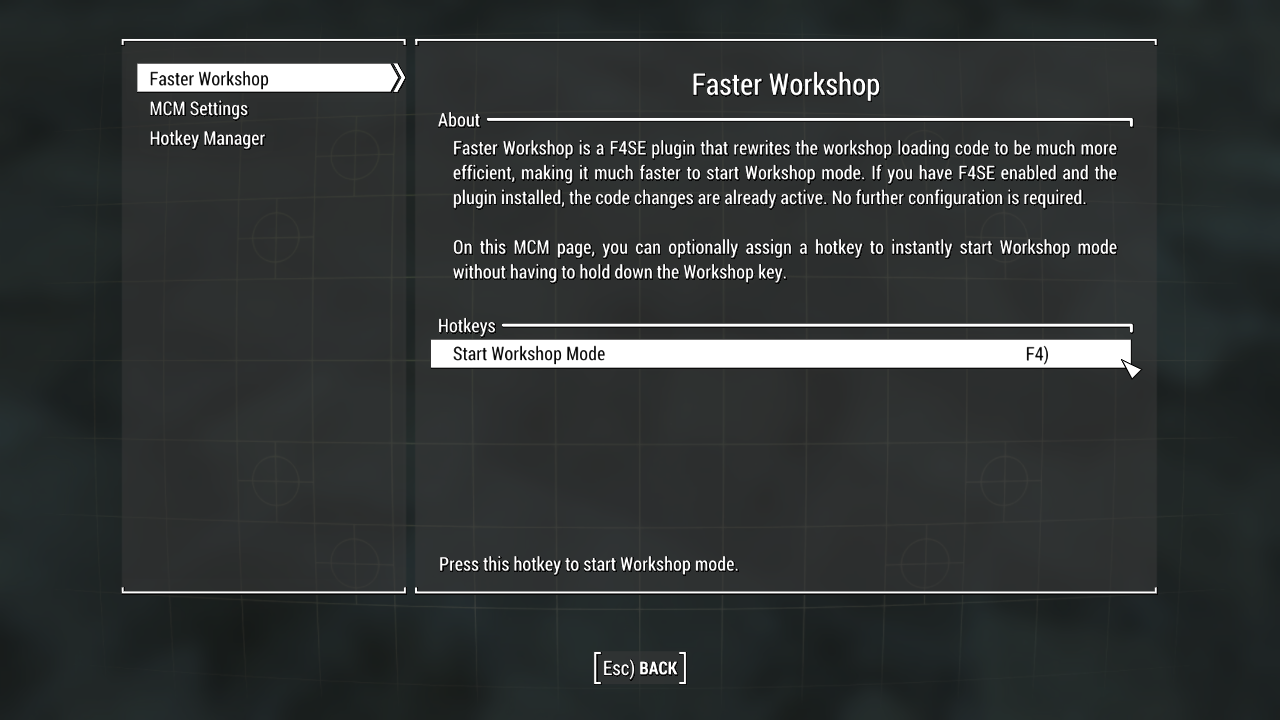 No matter what the processing power of your system is, the simple workshop menu takes forever to load and open up. It’s a strange phenomenon, and definitely an unnecessary element in an otherwise fast-paced game. This modder sent from heaven set out to investigate the cause for the delayed workshop menu loading times, and discovered that it had to do with less than optimal efficiency in the code lines.

This mod eliminates the waiting time for your workshop menu and draws it up instantly for you. You also have a hotkey to pull it up. It’s also important to get this mod if you’re planning to install other workshop related mods since it’s a base requirement. 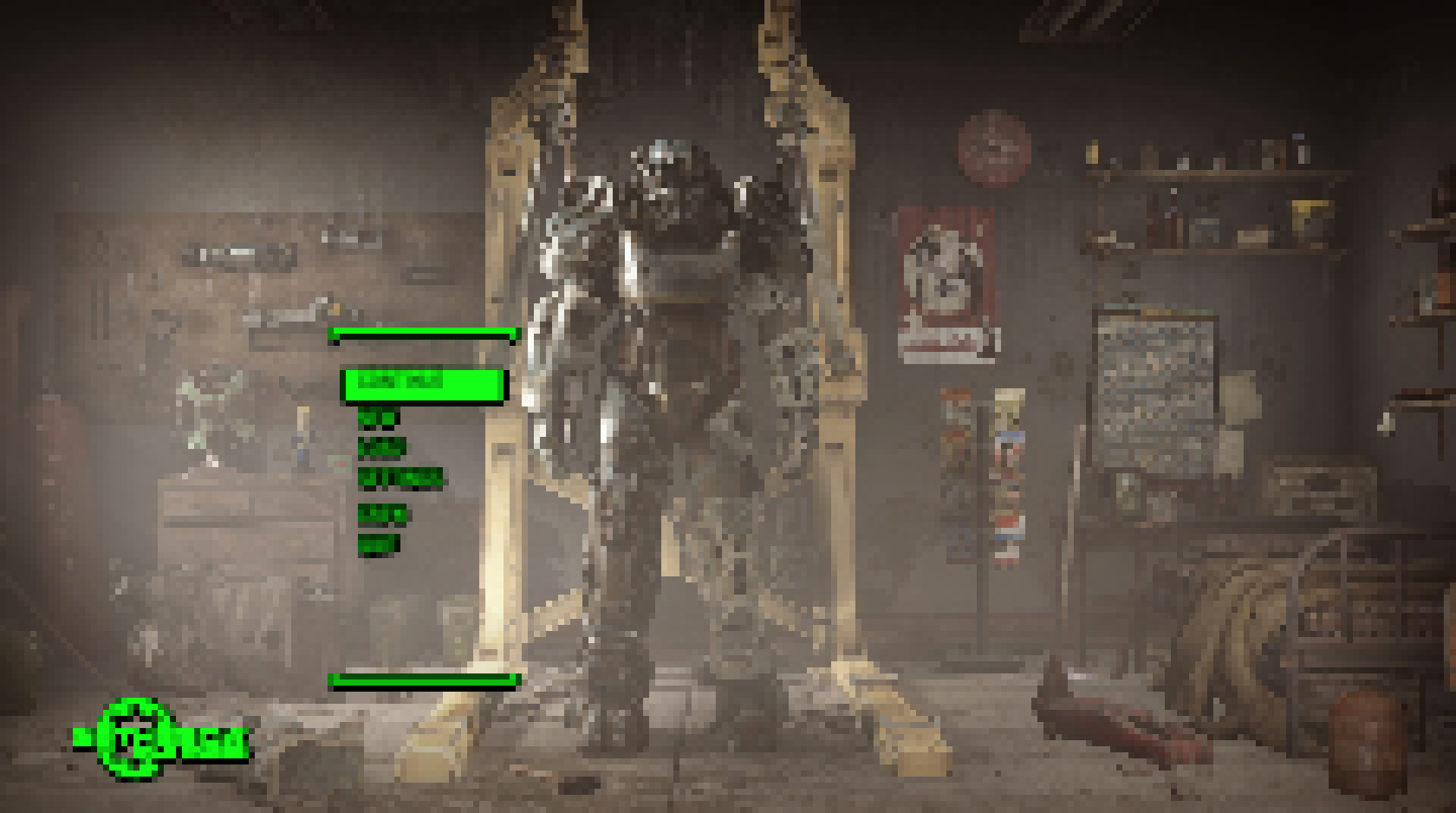 This performance mod gives you something that you wish was part of the original game. A simple video quality adjustment tool. It’s crazy how a tool thats inbuilt into youtube videos is missing from so many big games, but this mod closes the gap.

It allows you to run Fallout in borderless fullscreen while also having it rendered in any resolution that you want. This is great for both ends of the spectrum: for those happy to sacrifice some video quality in exchange for smoother gameplay, and those who want to really enjoy the 4k visuals that their systems are capable of. 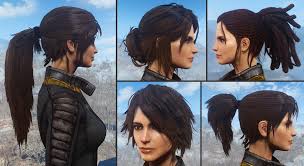 With the amount of combat that your female characters are involved in, they really should be getting annoyed with their hair around their face all the time. If you want to help them out or just like ponytails on women (and men, this mod works on both), Ponytail Hairstyles works like a charm.

This mod gives you 32 new hairstyles (mostly ponytail variations) that work perfectly well on your characters without glitching or clicking during movement. You have to go to a barber in-game and choose one of the Azar ponytails.

This mod doesn’t work with PlayStation 4 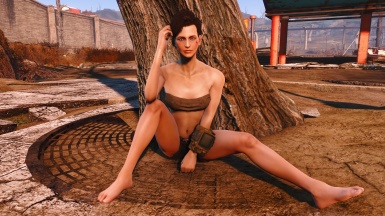 There’s a reason why this is one of the most popular mods to be downloaded for Fallout 4. A complete character overhaul for female characters, this mod changes their bodies and makes it much curvier. There’s no reason why you shouldn’t be able to get your female characters looking like your ideal picture of beauty, and this modder knows exactly what you want.

Both female player characters and non-playable characters will be affected by this mod, with adjustments to hip-waist ratio and other aspects. However, as one would expect: not all outfit mods are going to be compatible with this one, especially the game’s vanilla outfits.

These are just some of the amazing mods you can get for Fallout 4 to get you started. Listing all of the good, fun, weird, and interesting mods that have been made would take weeks. Explore some of the other mods for yourself and find your new favorite mod today.

Let us know if we missed anything!