See, for casual PC users, heat is not much of a problem. After all, all they do is browse the internet, write for their jobs/school or watch videos. Those activities do not place any big load under the PC, thus, they do not need any aftermarket coolers. But for us, gamers, the situation is different. Most modern games are likely to put your PC under near-maximum load and this can spike up the heat a lot. And high temperatures inside your PC can fry your hardware in the future. The hardware that gets really hot the easiest is your CPU. Some CPUs do not even come with a stock cooler. Because of this, most gamers tend to use external coolers like air coolers and liquid coolers.

If you are convinced that you need an extra cooler and made a little bit of research, you probably came across 2 different types: air and liquid. Let me briefly explain the differences.

Air cooling’s biggest pro is its price. They are cheap and widely available since they’ve been around for much longer. They are much easier to install than liquid ones. Plus, most GPUs and CPUs come with their own, big fans and if you didn’t purchase your PC case from for $10, chances are you have fans on your case as well. The problem is, these fans are usually really loud. They are big, so space in your case can be a problem. And they are not as efficient as liquid cooling.

Liquid coolers, on the other hand, are much more effective when it comes to cooling down your overclocked CPU. Plus, colorful tubes filled with liquid looks way “cooler”, especially combined with RGB lighting. And it is way quieter than air cooling. But they are more expensive and harder to install. Installation con can be neglected by using a sealed liquid kit but you lose the visual benefit.

What’s the best liquid cooler to keep your powerful CPU’s temperatures in check? We’ve tested the best AIO chillers to find out. 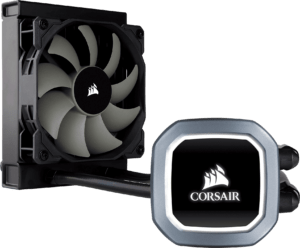 The new 2018 model of Corsair’s H60 comes with improvements in every aspect. Corsair’s updated cooler includes a 120mm radiator for low-noise CPU cooling and premium looks with white LED-lit logo on the cooling block. It performs on-par on the cooling side with its similarly-priced opponents and it is compatible with most CPUs. Since it is an all-in-one (AIO) liquid cooler, it is easy to install. The only problem we faced is the noise. It is moderately loud at idle and doesn’t decrease the pump speed automatically, and doesn’t even let you do it manually. But even with that, Corsair new H60 is one of the best budget choices for those that want an efficient water-cooling system. 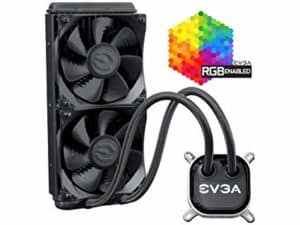 While EVGA is known for producing top-notch GPUs, power supplies, and motherboards, their CLC 240 is the proof that they are capable of much more. Moving up $30 to a more mid-range option, EVGA CLC 240 is an excellent and newbie-friendly choice with its pre-installed radiator fans. It has a slick look with its subtle RGB lighting and performs even better with dual 120mm fans against some of its 360mm competitors. It can cool a very hot processor like i7 4790K to upper 40 Celcius degrees. The only problem, like our previous pick, is the acoustics. Stock fans can get loud on full loads, but that is a small issue for this cooler with its excellent performance per dollar. 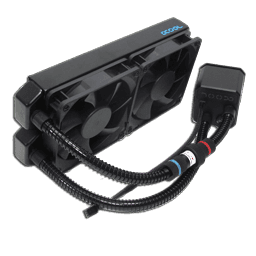 While Alphacool is one of the less-known brands on the cooler market, they certainly aren’t less-capable. The German brand’s Eisbaer 240 bears a lot of similarities to our previous picks on this list with its dual 120mm radiator fans, however, it is much quieter. At the maximum fan speed, Eisbaer scores an impressive 41 dB, making it one of the best noise/performance coolers on the market and the absolute best on its performance range. Overall, if you want a quiet and simple best liquid cooling system, Alphacool Eisbaer 240 is the way to go. 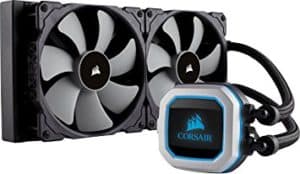 Most of the recent liquid coolers use Asetek’s 6th-Gen Pump technology, but if you check the general test results that use this technology, you can see that that 6th-Gen isn’t much of an improvement over the previous one. Even though Corsair H115I Pro uses this, they did their best to modify their recent liquid cooler to combine a large cooler with good acoustics. Corsair H115I Pro comes with their own 2 silence-focused ML120 Pro fans. These 140mm fans combine low-RPM, low-noise with impressive cooling performance. Since the fans are bigger, they do not need higher RPMs to perform as good as their smaller counterparts. Corsair ditched app control and RGB lighting for this price/performance so, for $120, you get a silent and capable liquid cooler. 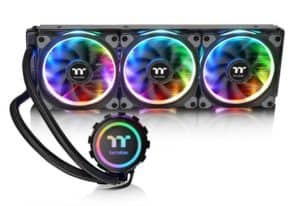 If you know basic physics, you know that surface area can affect a lot of equations. Granulated sugar dissolves faster than cube sugar, for example. Same goes for the coolers. The more surface area you have, the better your cooling will be. And with bigger radiator, fans do not have to go to higher RPMs to cool things down and this keeps the things much quieter. Even though Floe Riing 360 performs similarly to its smaller opponents, it is much more silent and the added RGB lighting adds that gamer look we all love. If you have a big case that can support a 360mm radiator, Thermaltake Floe Riing 360 is amongst the best. 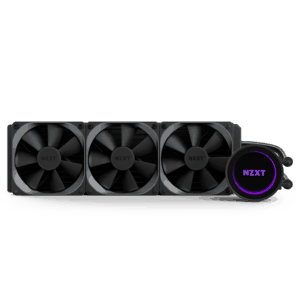 Our last pick is for the true high-end gamers that love pushing their hardware’s limits with overclocking.

NZXT’s Kraken X72 comes with three of the company’s Aer P120 fans with a maximum speed of 2000RPM. It comes with NZXT’s user-friendly PC monitoring software, CAM, that lets you overclock, monitor temperatures, choose the RGB lighting, display details about X72’s performance and much more. As expected, it has great looking RGB lighting, too. Its cooling performance is amongst the best within its price range and despite utilizing triple 120mm fans, it is much quieter. All these come with a higher price, but except that, NZXT Kraken X72 is the best choice for extreme overclocking or true high-end CPUs like Threadripper.

There it is, best CPU liquid coolers for all budget ranges to keep your PC cool and healthy. Longevity is an important factor for PC building and an effective cooling system is the heart of that. We hope that our guide convinced you to get an external cooler and if it did, we hope it helped you make your choice.