Here we’ll run through 25+ of the best Skyrim ENBs available in 2019. ENB is an additional file that significantly improves graphics or environments of the game, and basically serves as a graphical or stylistic overhaul. Those who are looking to change the old visuals of Skyrim to completely new and impressive ones should consider checking out some of the excellent mods.

The Grim and Sombre 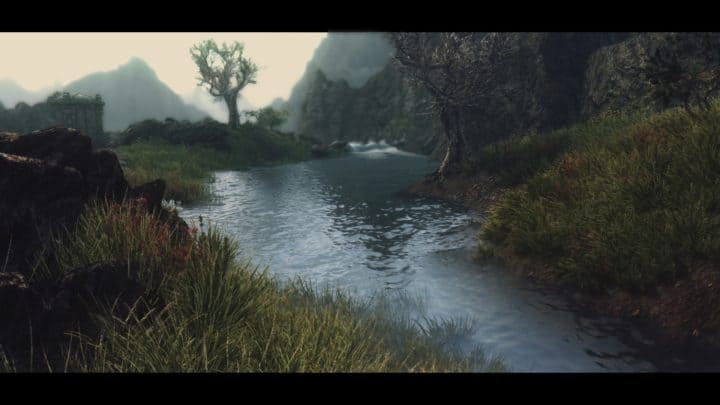 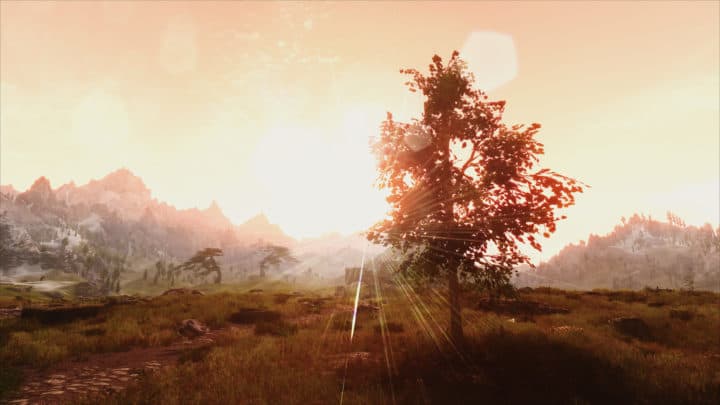 This one particularly focuses on improving colors and lights of the game’s areas, but it can be quite an intensive mod to run, and you may find your performance struggling if you use this ENB. If your PC can handle it, though, check out this stunning mod to drastically improve the lighting of Skyrim. 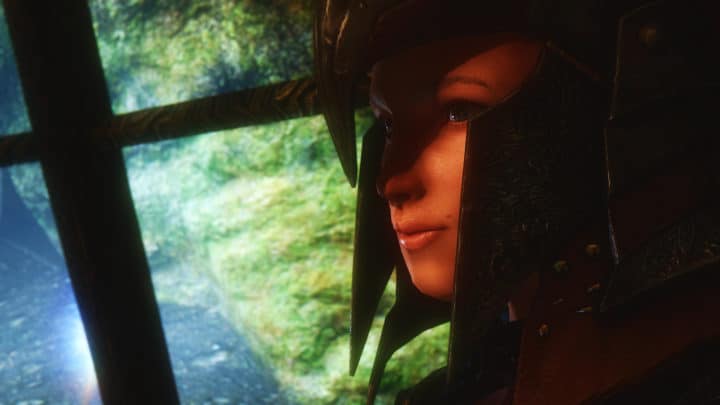 Tranquillity is a great environmental overhaul mod that greatly improves the environments of vanilla Skyrim, which, let’s be honest, looked pretty bad. Give your Skyrim a peaceful vibe with this excellent ENB.

You can also check out best Skyrim Mods you should download on Xbox One, PS4. 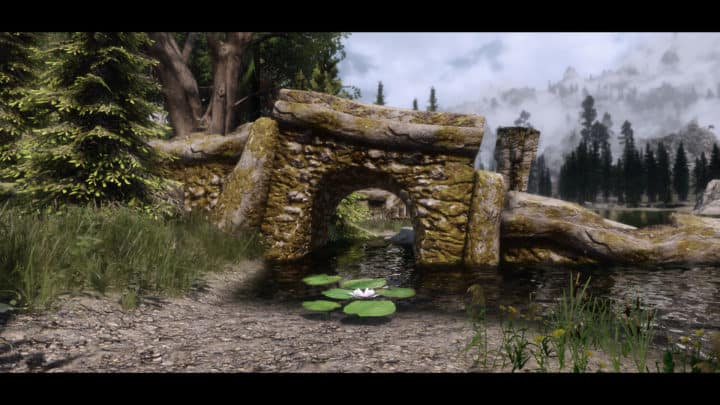 This ENB adds a very nice overlay to the look of the environments. The main advantage is that it doesn’t take a particularly powerful PC to run, whilst it still gives you overall improved lighting and atmosphere. A good halfway point for people with less-than-optimal PCs. 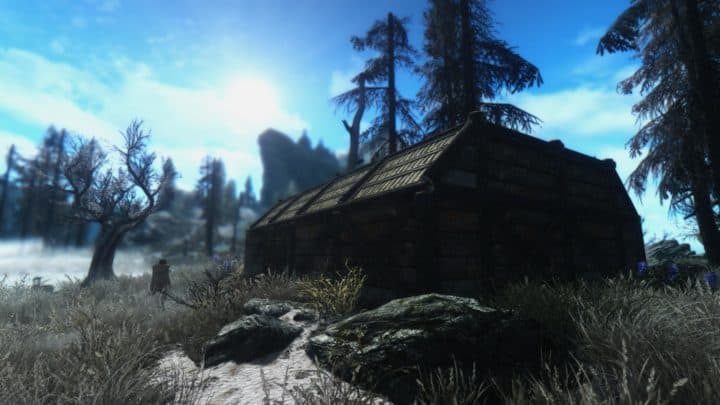 A gorgeous and colorful ENB that aims to make Skyrim prettier, sharper, and more vibrant, whilst also balanced for both weak and powerful PCs. Whether you’re playing on a super beefy Titan-infused PC or a crappy notebook laptop, you’ll be able to enjoy this graphical overhaul.

The best part is that bokeh effect (blur created by out-of-focus images) that makes the Skyrim look great and far more fantastical. Also, it brings you several additional schemes to choose from and those three slots that you can fill with your favorite ENB mods. 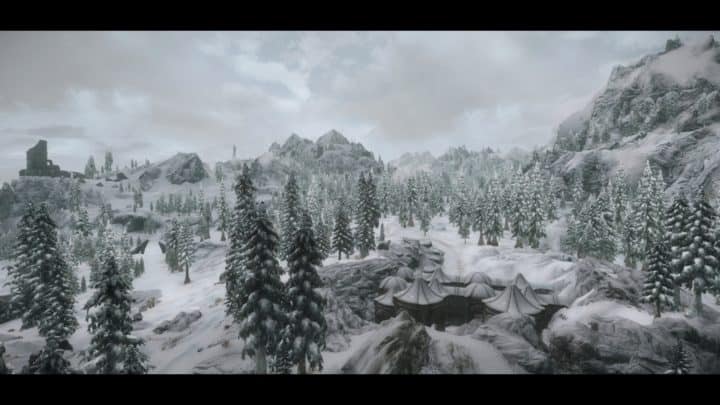 It creates a dreamy look or a soft tone environment that is perfect for the forests or foggy places. Great for improving the many, many forests, foggy places, marshes, and more that’ll you be spending hours walking through. 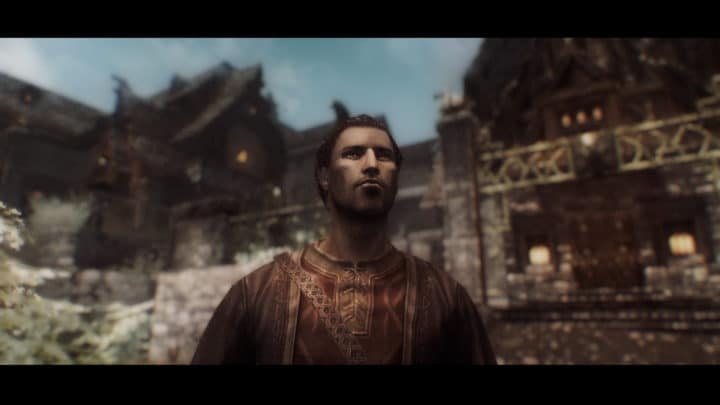 If you want your surrounding having a cinematic feel, then go for this ENB. It scatters the filmy look in the environments, so it feels more spectacular while exploring. 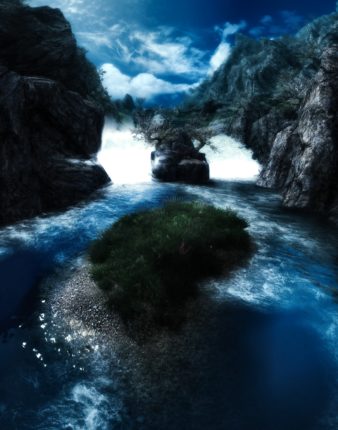 To get the best color schemes in almost all the environments this is a must have ENB and thus it comes as one of the top Skyrim mods. Just try it and you will get to know what the real magic in this ENB is. A truly stunning mod! 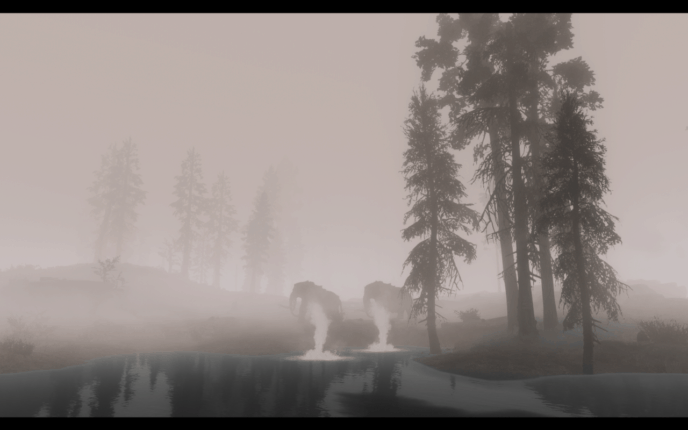 This creates a wonderful aura that contains black and white or similar tones. The ENB mod works amazingly with warm shades and makes everything stand out. Great for building a moodier, more atmospheric Skyrim. 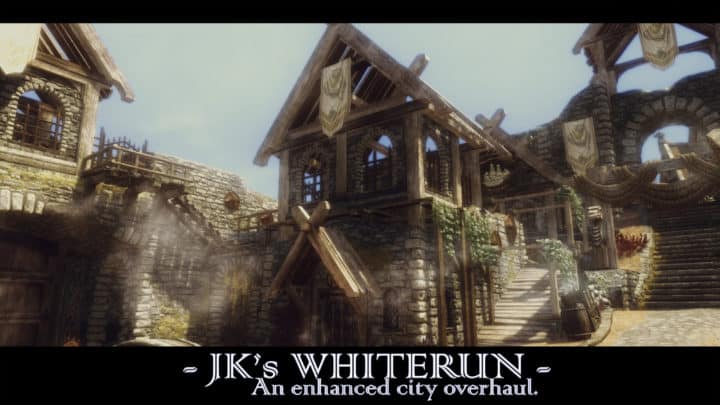 The mod dramatically improves cities and towns, making them look and feel more alive. It helps to give the game world an entirely different feel, making some of the towns and cities feel almost like a completely different game. 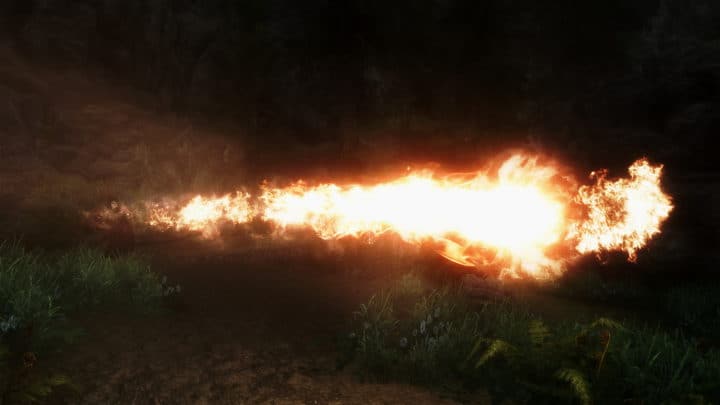 Most of the time, the fire in Skyrim looks weak and underwhelming, especially when it comes from a fireball flying out of your hand. It’s a big part of why vanilla Skyrim’s magic always felt so weak and unappealing to me, the spell effects just look naff.  This mod fixes that issue and vastly improves the look of all fires and fire spells. 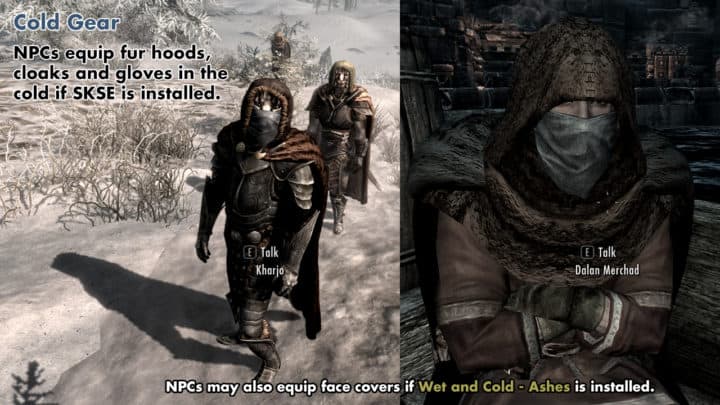 The world of Skyrim is meant to be a wet, cold, and harsh place in the far Northern region of Tamriel. So, why doesn’t it feel like it? Sure, vanilla Skyrim has plenty of snow and big mountains, but you never get the sense that it’s a particularly cold and harsh place to live. The people certainly don’t seem to mind! This mod intends to alleviate that problem, by making the world of Skyrim feel wetter, colder, and generally more unpleasant. Characters will dress more appropriately for these harsh conditions and will react more to the cold. 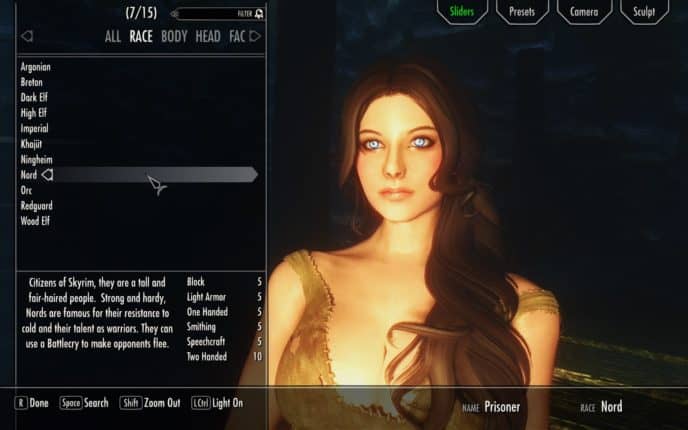 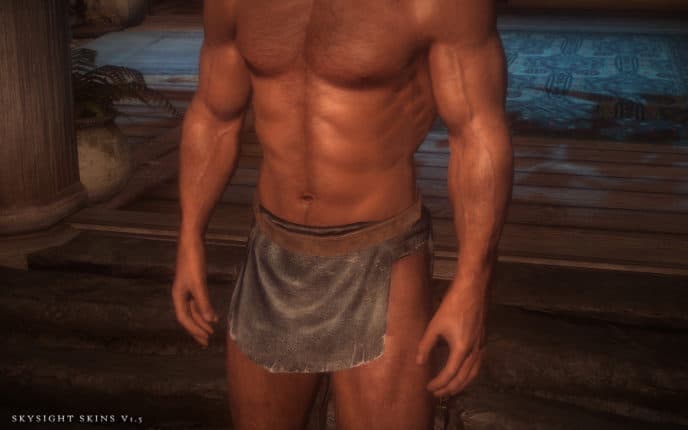 A great mod that makes the skin and characters of Skyrim look much better and far more detailed. It helps to make the people of Skyrim look prettier and less… well, ugly. I mean, just look at that man’s skin! Very nice. 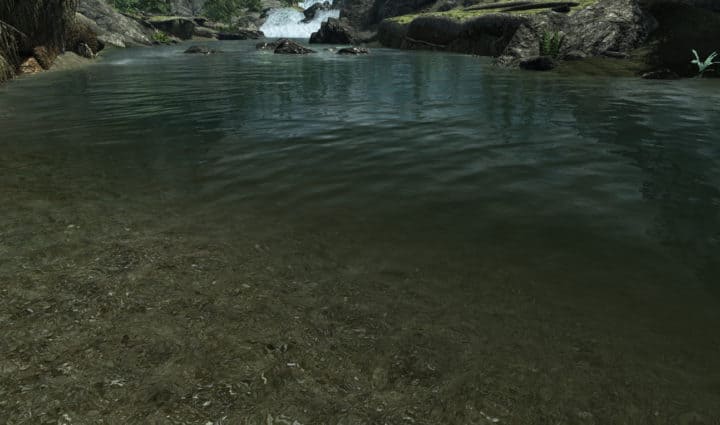 There’s a lot of water in Skyrim, and in vanilla Skyrim, it doesn’t exactly look very good. You’re going to seeing it and wading through it a lot during your adventures, so why not make it look cleaner, prettier, and just better overall basically? There are two options for improving the appearance of the water in Skyrim: Pure Waters and Realistic Water. Realistic Water aims to simulate realistic water physics and fluid motion, while Pure Waters makes the water appear calmer and more placid.

This one improves all the greenery to a great scale, so the forests look excellent. Also, it improves the lighting in these areas and improves the grass textures even more. It adds details to forests and makes all the woods looking entirely new. 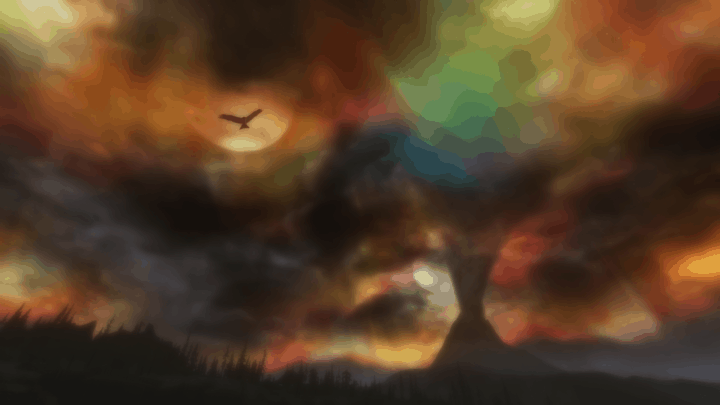 This wonderfully colorful and vibrant mod aims to make the world of Skyrim feel more fantastical and mythical and less flat and ordinary. Think more Lord of the Rings, less historical Viking fan-fiction. Also, you get to say tetrachromatic, which is fun, too. 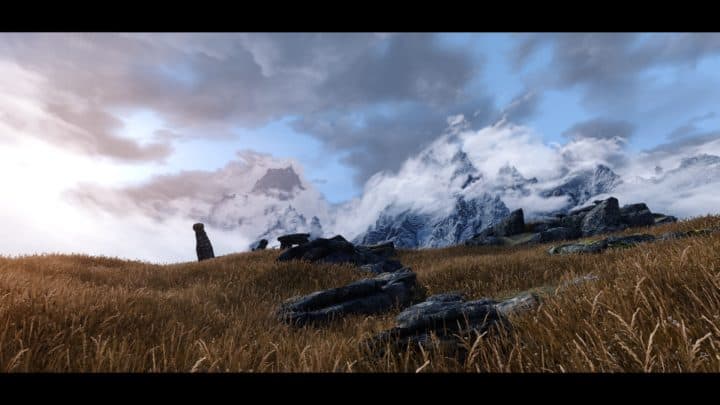 It is an improved version of Vividian ENB that creates an environment of soft tone that suits foggy places. A better option for those who are willing to push their PCs to their best for the sake of a beautiful Skyrim. Good stuff!

This mod is such a blessing as it makes all the environments colorful and alive and it is available for both ReShade and ENB. A great way to make the world of Skyrim more vibrant and dynamic and less grey/brown and less dull. 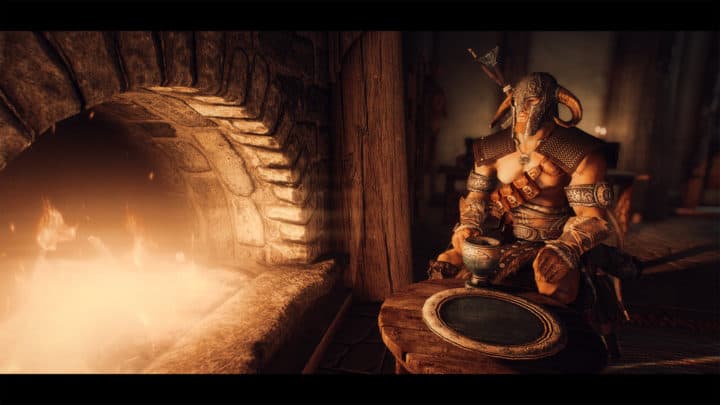 As the name implies, this is another version of the Cinemascope ENB that creates a film-inspired aesthetic for the environments of Skyrim. This mod aims to give Skyrim a more cinematic look and feel, but it’s up to you to decide whether that’s something you want. 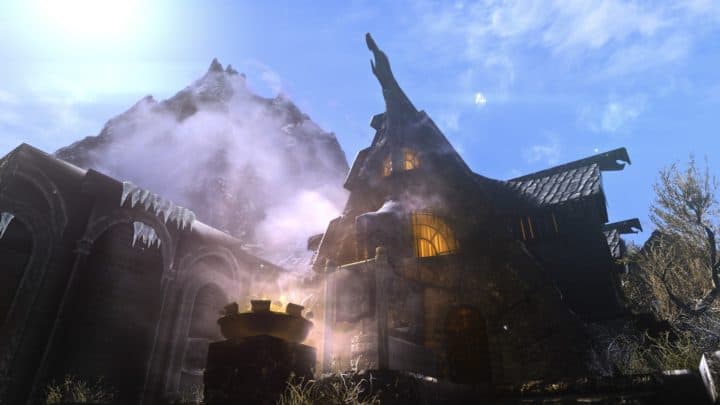 This one works with weather mods such as Climates of Tamriel, Dolomite weathers, Natural Atmospheric Tamriel, Surreal Lighting, Vanilla Weather, etc. It’s a great way to bring together some of the best weather overhaul mods available to Skyrim to have the weather, sky, and environments all looking as bright, vibrant, and detailed as possible. 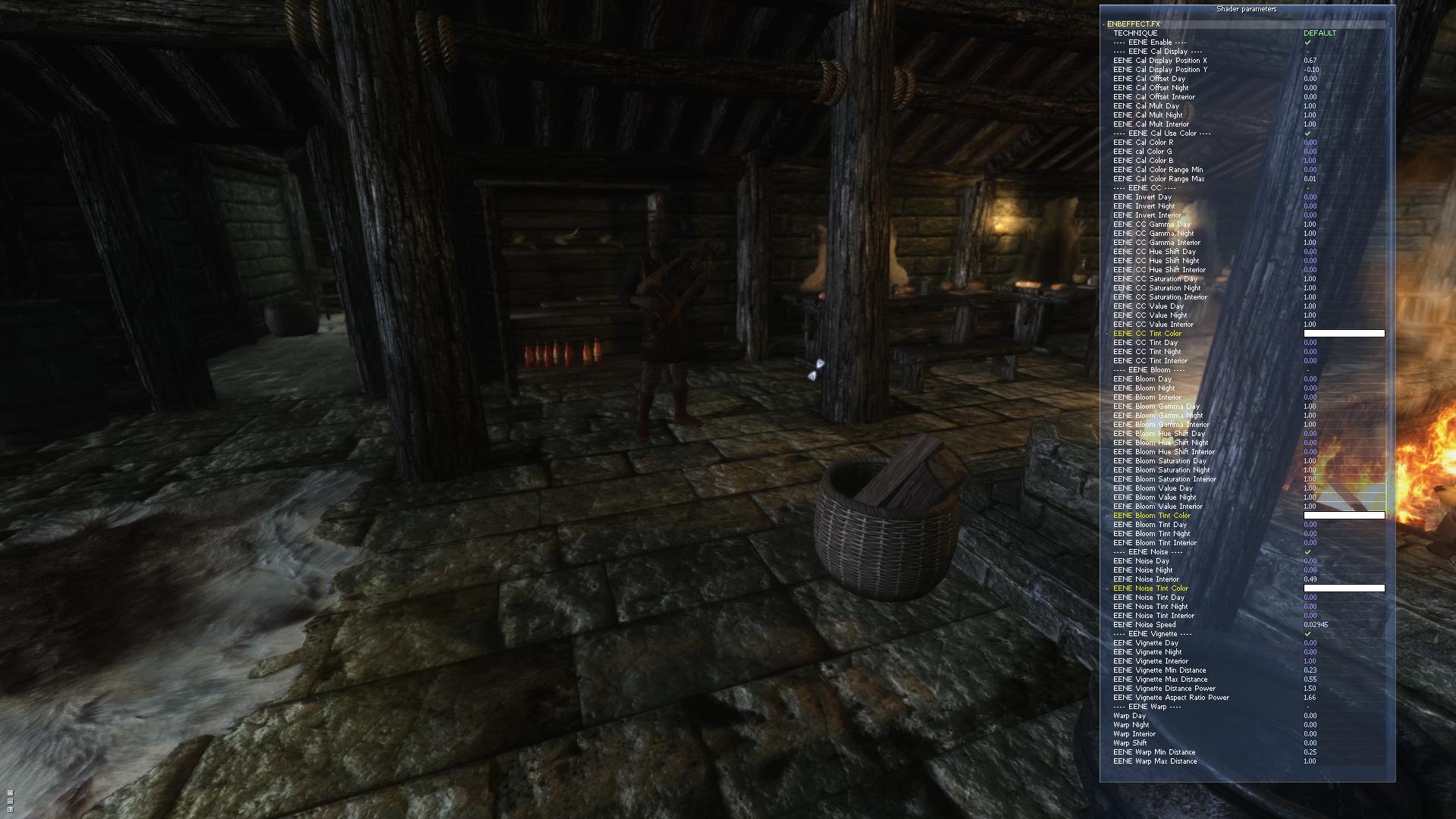 A lot of ENB’s have issues with showing Khajit’s Night Eye effect as well as Gopher’s Predator Vision mod, This Enhanced ENB Night Eye fixes these issues by letting you adjust the settings to be able to not only enable both effects but also specify them to your requirements.

It has a special command console called the Shadow window where you can adjust the lighting, texture, shadows and other display settings that can drastically affect how Night eye looks in the game. 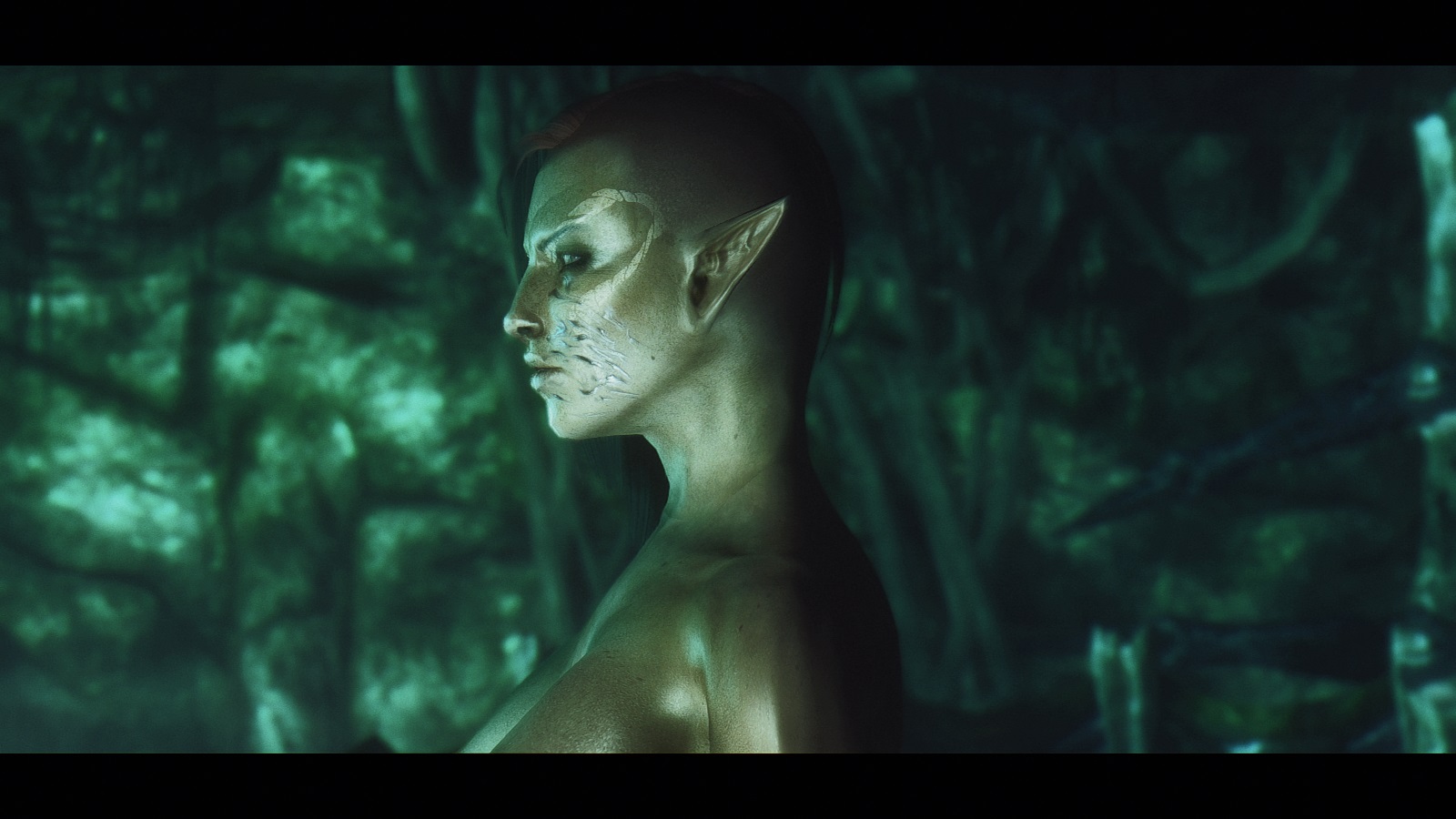 We all know that Skyrim had good graphics to begin with… for 2011. The ENB gives an entire visual overhaul, transforming the game into a complete cinematic experience. This preset transforms the entire world with its ‘realistically grim, moody and atmospheric feel’, as the creator says.

It works best with modded characters to do justice to the entire ENB preset. The present is also not compatible with Climates Of Tamriel, RLO, or other lighting mods. 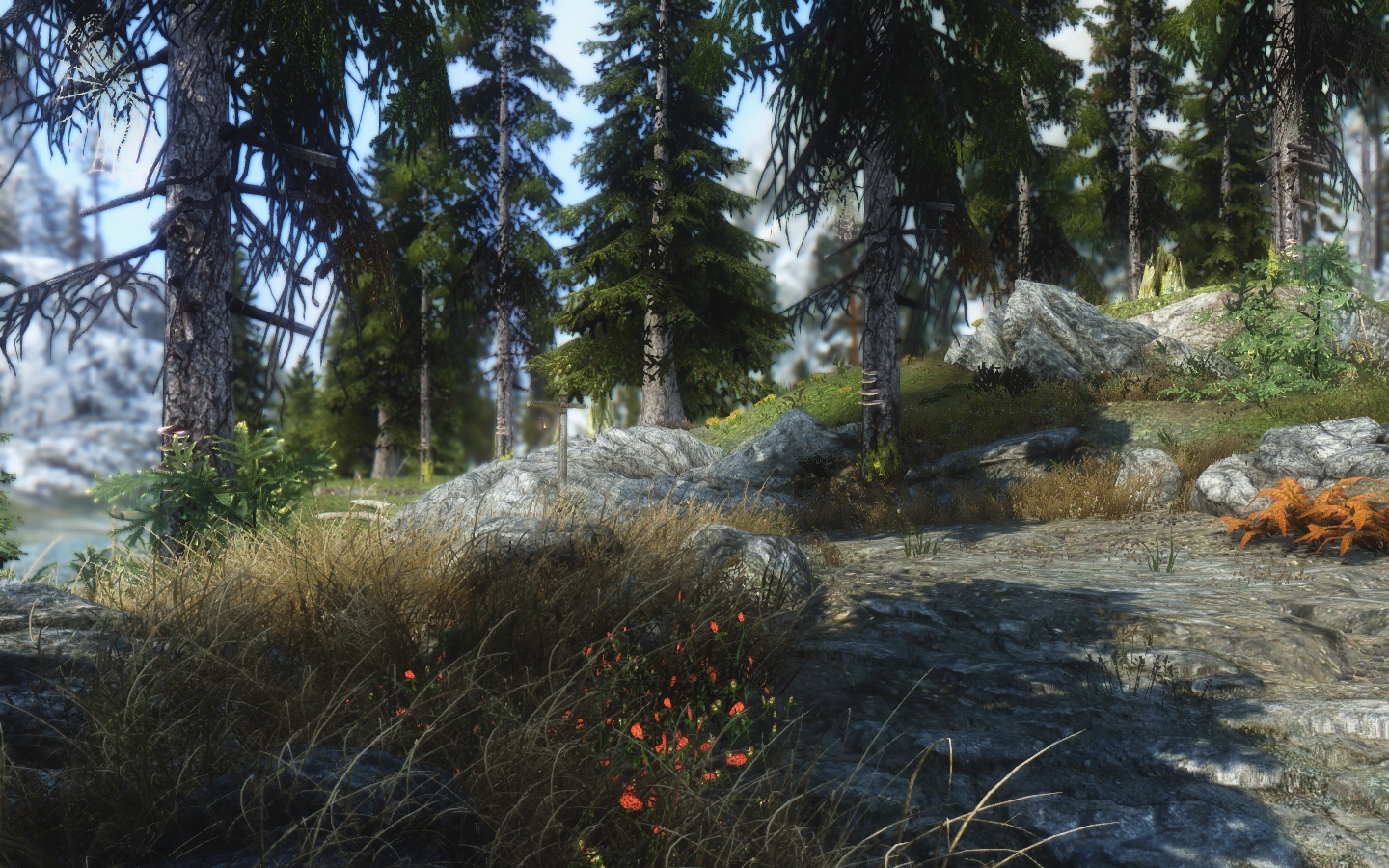 If you’re the kind of gamer that really cares about realism since it makes the gaming experience that much more immersive: you’ll love what Photoreal ENB does to Skyrim. Instead of the bright and colorful presets we often find, this one is darker and more realistic, while still giving you stunning visuals.

I think what makes this preset special is the realistic use of shadows. Light coming through the trees in the forest along with object silhouettes all look exactly like real life in this ENB. 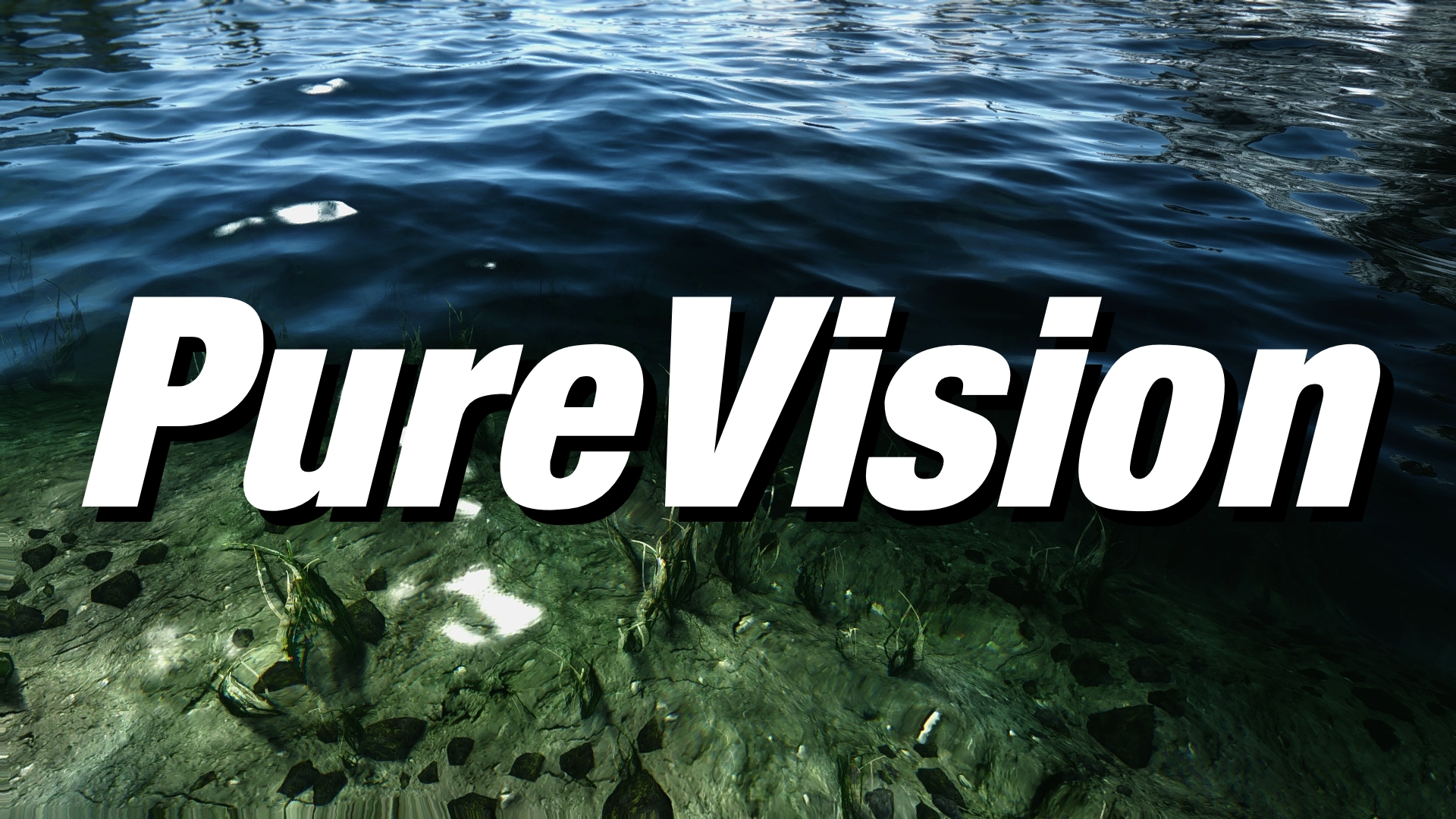 While we already included Pure Waters and Realistic Waters on our list, this PureVision ENB is possibly the best ENB for water visuals, as well as doing so much more.

It makes the water much more multi-dimensional looking, with the perfect use of tone, lighting and shadows.

It’s meant to be a realistic ENB but it definitely provides a surreal fantasy dream-like overlay to scenes. Getting this stunning mod is definitely worth all the GPU it eats up!

If you’re a sucker for skies, this ENB is for you. It completely transforms the sky from a blank canvas of blue to an incredible gorgeous scene of ethereal fluffy clouds and vivid sunset colors. What’s more, the sky adapts to what the weather is like, in an uncanny meteorological way.

Bonus point for the sparkly stars.

However, you’ll want to combine this with other mods and ENB’s since it only changes the skies and waters, and doesn’t give too much of an upgrade to stones and trees..

Including ENBs with Skyrim make the entire game world a spectacular place to perform gameplay. Every one of these mods is the best Skyrim ENB that you can try from standard rim to special rim. These are a fantastic source to have improved graphics to a great extent so try any of them and share how it feels after having these mods.