Combining the elements of classic action games with the freedom of sandbox-style creativity, Terraria is one of the best indie games ever made. Playing with Best Terraria Mods makes the gameplay more fun and enjoyable. It is completely open and what you want to do in any given time is always up to you. The game kept (and even grew) its player base for 7 years and it is updated frequently even to this day. 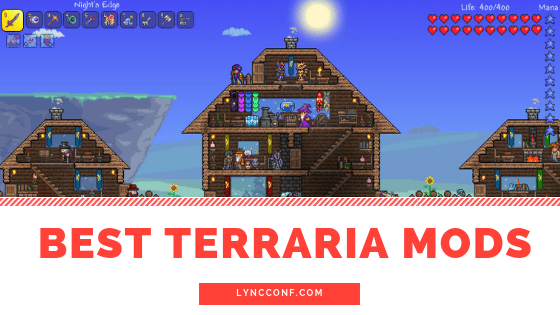 One of the elements that the game owes its success to is its openness to the modding community. The game is easily modifiable and the developers always welcomed mod developers. There are hundreds of mods; from quality of life improvements to complete overhauls. Since it is already really cheap ($9.99 on Steam) and goes on sale really often, chances are you have Terraria on your Steam library but if you have never played it before, now is your chance to jump in and try it with all the mods we will list here. Even if you only played the vanilla game until now, some gameplay mods and overhauls can revitalize the game for you. Here are the best Terraria mods.

Love Playing Terraria, check our article for games like Terraria. You might find your next favorite gae there.

How to Install Terraria Mods with tModLoader

Terraria does not have a Steam Workshop support, so you will have to install an application called tModLoader. It adds a mod browser to the game’s main menu in which you can browse all the great mods you want. It also keeps your native save files separate from the modded save files. You can download tModLoader here.

Unless you are an ultimate 3000-hour Terraria veteran, learning the recipes of the hundreds of different items, from the simplest necessities to the more complex items, is not an easy task. In order to save time from browsing through Wiki’s all day, you can install Recipe Browser. You can search every recipe by an item’s name and see what materials are required to craft it. It also has a bestiary and item database. 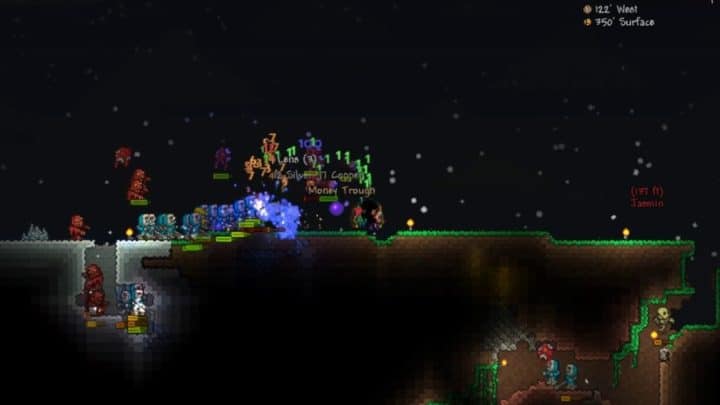 Terraria is a fun game, but it is also one that requires a lot of grinding. Farming for materials and rare items can sometimes take quite a bit of time and it can get a bit tedious if you do not like grinding. Reduced Grinding mod does what its name suggests. It adds new potions that increase spawn rates, configure/skip events and increase the drop rate of rare items. 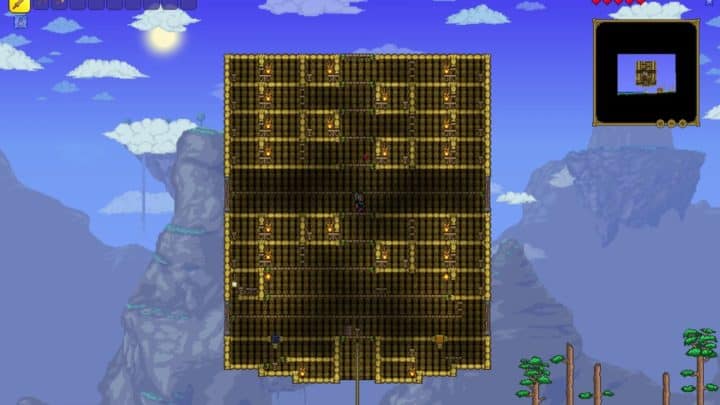 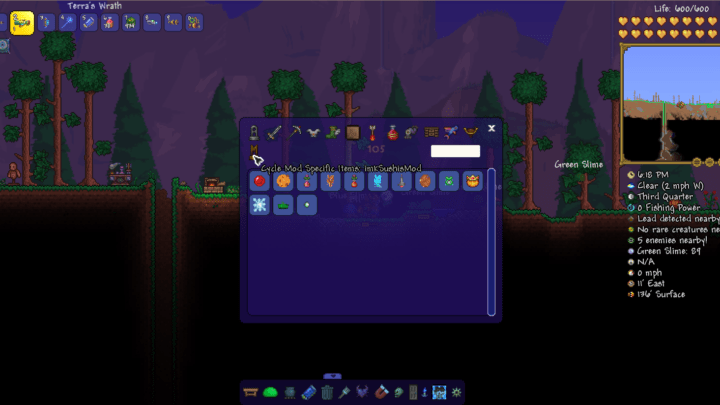 If you are an action-oriented player and do not like grinding, another option you have other than Reduced Grinding is imkSushi’s crafting mod. It lets you craft whatever you want instead of killing the same mobs again and again. It adds a lot of new recipes and also brings some useful items. It also lets you re-summon the bosses you previously defeated if you want to re-live the action. 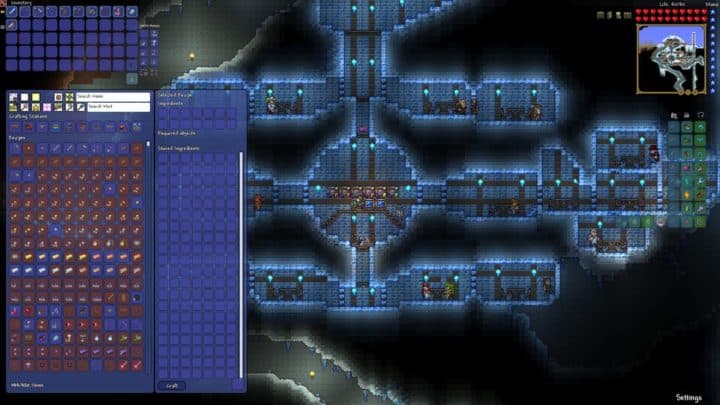 During the hundreds of hours you will spend playing Terraria, you will end up scavenging a lot of items. And keeping their storages in check can get painful after some time. Magic Storage lets you construct a central network that allows you to access your items from one single block. If one is not enough, you can even set up multiple access points to use your storage from anywhere in the world. You can also search your storage for items with a certain name or item type if you have an abundance of items. 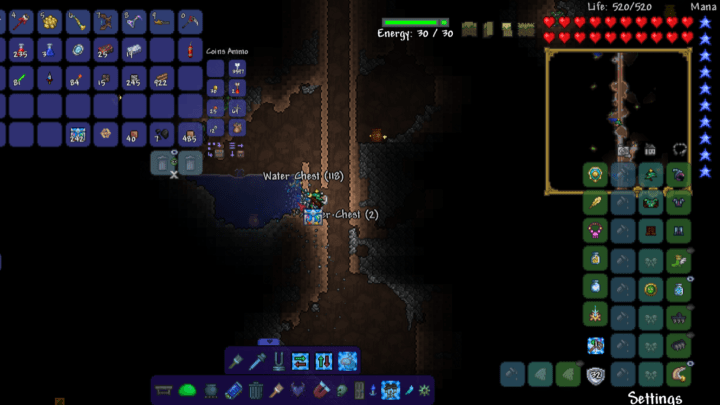 This mod is not an overhaul or a gameplay modification, it is rather a tool that lets you mess around with the assets of the game. It is basically native Terraria’s sandbox mode that lets you spawn anything you want and it also lets you paint the map or create/copy-paste new areas on the map. It is a valuable tool for the creative minds and fun to play with for other people. 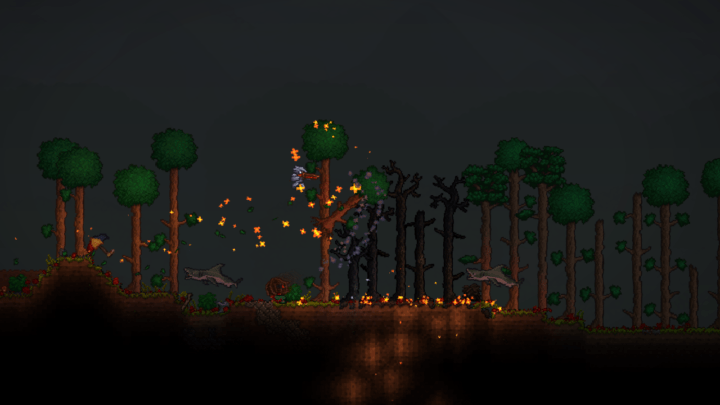 Even though it does not have a cool name like other overhaul mods, Terraria Overhaul actually changes a lot more than other overhauls. Instead of adding new content to the game like an abundance of items and bosses, it focuses on adding new gameplay mechanics and completely remaking existing ones. It changes the combat, adds seasons, dodge rolls, a fire & electricity systems, brings a new movement system, enhances enemy AI and gore and more. You can watch the teaser here to catch a glimpse. 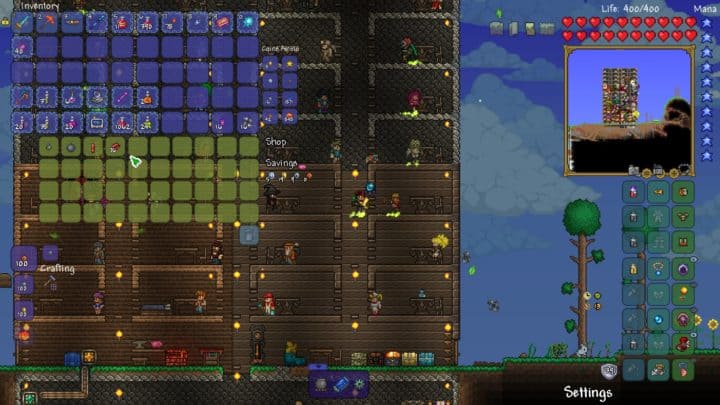 All kneel before the biggest mod of Terraria: Thorium. This mod is so big and adds/changes so much stuff that we are surprised it is not called “Terraria 2”. It adds 1800 new items, 55 new armor sets, 180 new enemies and banners, 150 new tiles, blocks and furniture, 10 new NPCs, 11 new bosses, a new biome, 2 completely new classes and rebalances the game on many different aspects. If I were to recommend only one mod to install from this list, this would be it. 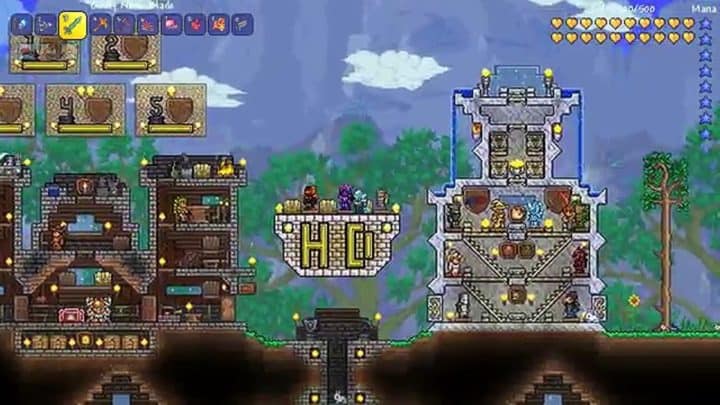 One of the biggest mods for Terraria, Tremor adds an abundance of new items features and feels like a big, free DLC to an already deep game. It adds over 1600 new items, 21 new bosses, 13 new NPCs, 2 new invasions and more. All the new weapons and armors to grind and bosses to kill adds a lot of longevity to this game and makes this mod one of the musts if you are a fan of the game.

This amazing mod turns what is already a deep game into a deeper, fully-fledged RPG experience. It adds races, classes, a leveling system, quests and of course, new items. It certainly makes the game longer and more challenging but if you just want to try out the new stuff it brings without worrying about classes or leveling, it has an Action mode. It is perfect for RPG fans and for a new playthrough. 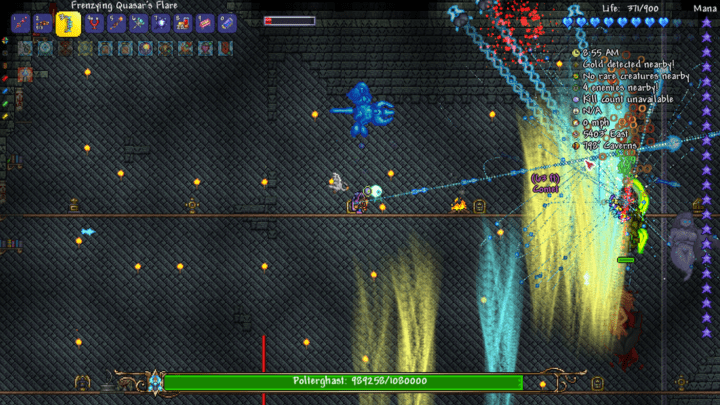 Just like Tremor and Thorium, Calamity adds an abundance of new items to the game like 1100+ new items, 22 new bosses, 220+ new enemies, three new biomes, two new modes for the start of the game, ore generation on new world creation and recipes for vanilla items that were previously non-craftable. It is yet another content rich mod to try out after playing the native game and other overhauls. 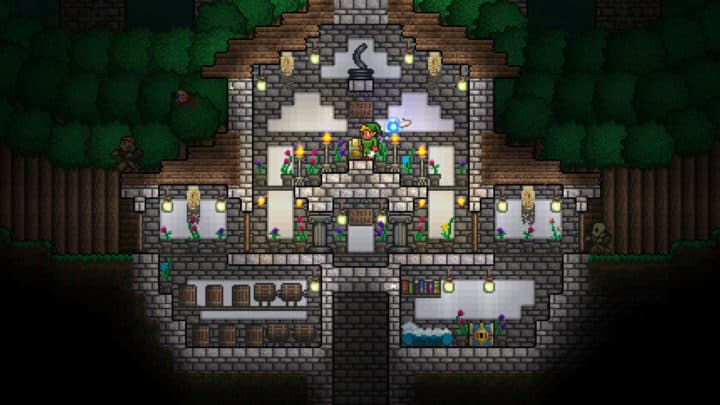 Once you start playing and enjoying Terraria, going back without sinking hundreds of hours into the game -especially with the mods we listed here- is not an easy task. And hearing the same music over and over again during those hours can get boring pretty quick. This music package mod adds the classical musical pieces of Legend of Zelda: Ocarina of Time which suits the theme of Terraria perfectly in my opinion. 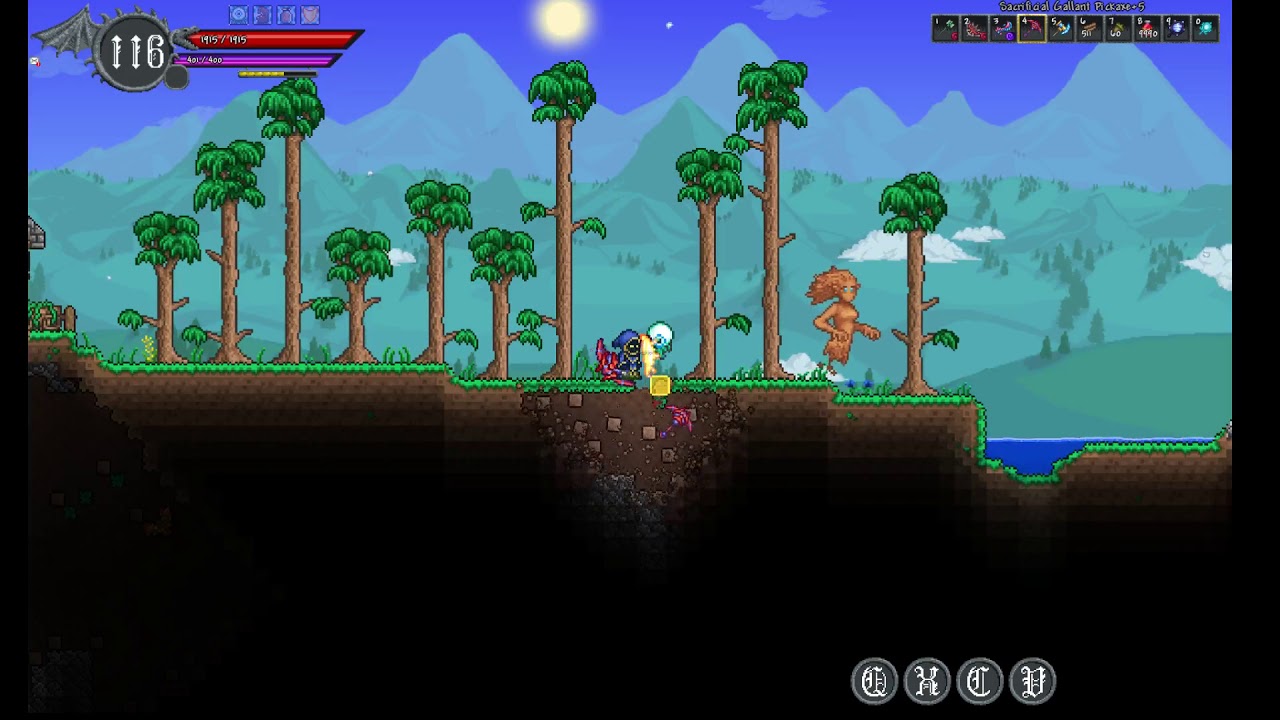 Terraria is sometimes dangerously on the verge of being considered a clicker game for the amount of clicking that you need to do during mining. Just to get your character to swing his… pickaxe, you have to click on every single ore. This mod gives your character a little bit of autonomy.

Instead of clicking on every block, you can hold down the veinminer hotkey down, and all the ores of the same ‘vein’ will be mined at the same time. You’ll get your mining done in a fraction of the vanilla game’s time.

It’s difficult to pinpoint what’s the best thing about this quality-of-life mod. It basically adds a lot of excitement to the game: with new NPCs that set up shop to sell you plenty of items and materials that will help you progress through the game.

You can play by the OG rules and purchase only wood and other necessary materials from the lumberjack, or you can spice things up with visiting the mutant who will be able to sell you various cheats like a trinket that summons bosses. It’s exciting because it feels like someone brought a black market to the world of Terraria. 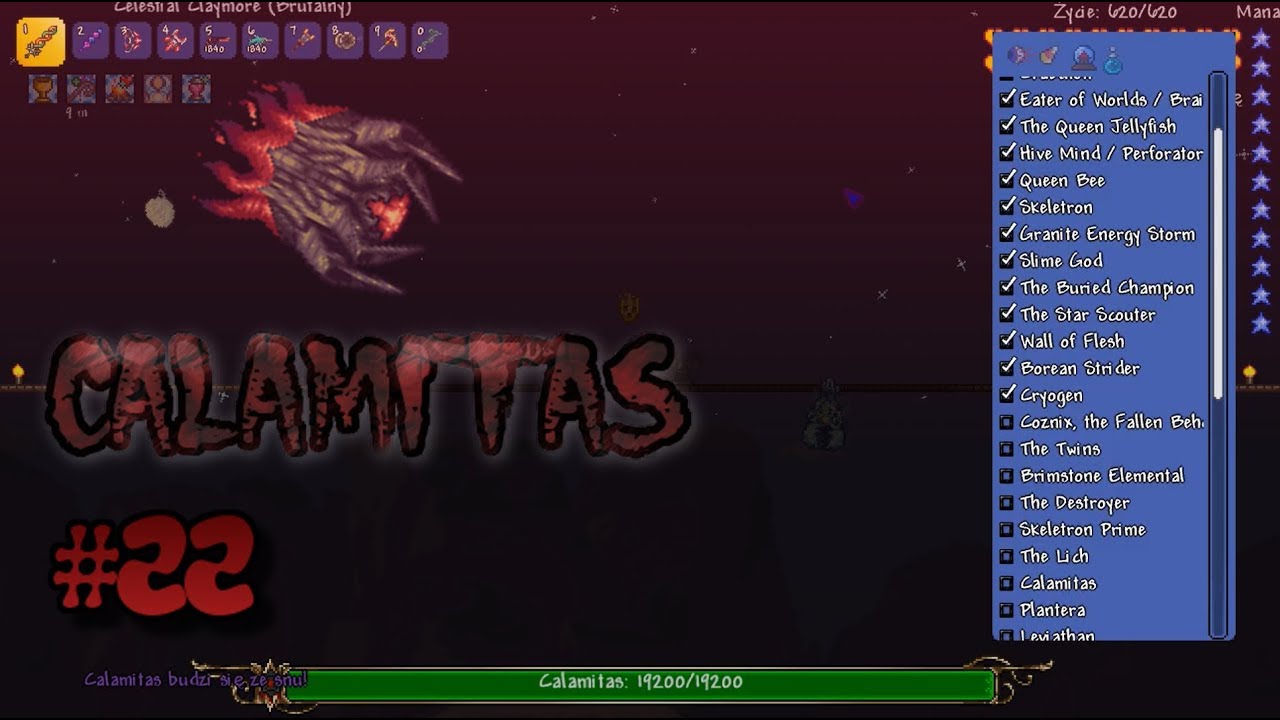 It’s difficult to lose track of all the boss battles you’re supposed to be having; especially if you’ve been mining for too long. This mod adds a cute to-do list that keeps track of all the bosses you’ve slain and the ones you haven’t encountered yet. It’s convenient as it puts things into perspective, and you can prioritize what to do next.

It’s also especially useful if you’ve downloaded a lot of mods and extension packs and have more bosses than you bargained for. As you slay a boss, the list will automatically tick it off the list. It’s incredibly satisfying: you’ll feel like you’re doing the chores your mom told you to, except in Terraria and they’re not chores at all. 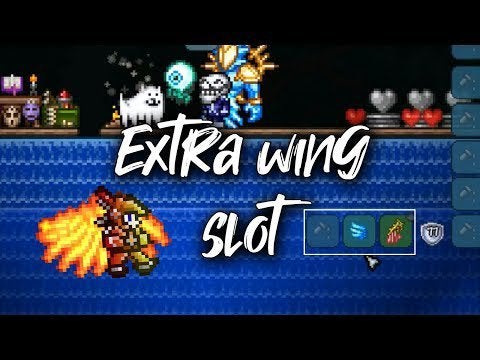 We’re constantly in awe of this modding community. The best mods can be so detailed, with hundreds of added textures or extensions. Other times, the tiniest tweak or extra bit of storage improves on the quality of life while playing the game. This modder Abluescarab did exactly that, adding a wings slot on the armor and accessories page of your inventory. It’s easy to find this one (it’s next to the defense icon).

You do have to unequip your wings from your dedicated slot before you decide to install this mod! The mod allows you to equip wings even in the normal accessory slots. 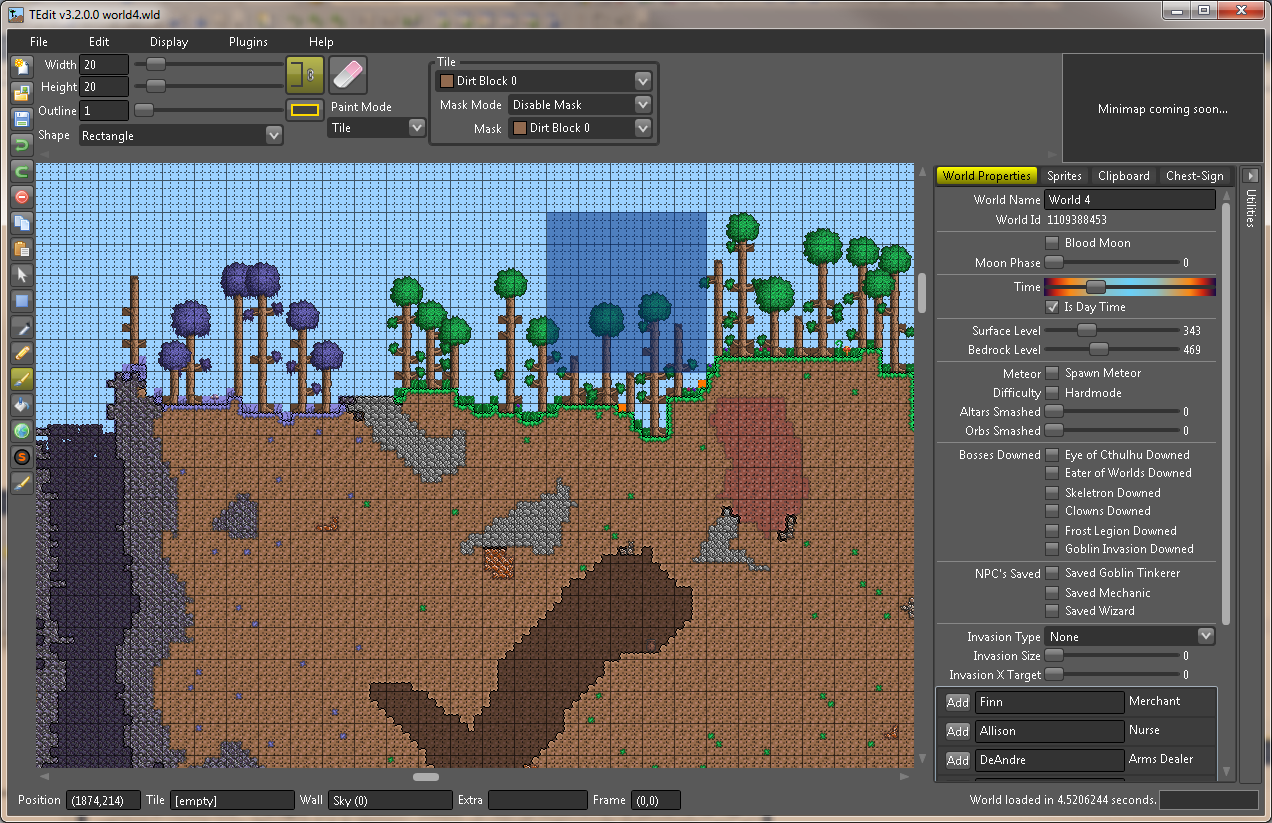 TEdit by BinaryConstruct is one of the most creative mods on this list. Of course, it’s not technically a mod since it doesn’t actually affect the gameplay of Terraria. Instead, it lets you edit the actual world in a photoshop type manner.

This means that the possibilities are endless! You can completely edit any aspect that you’d like to visually change, as well as add whole new objects and items to the game: from a treasure chest to castles, whatever it is that you want.

So these are the Terraria best mods you can download for free at the moment. It is already a long and deep game but these mods can revitalize the experience or even make the game feel like a new game. Be it a simple addition or a gameplay tweak or complete overhauls, we are sure you can find whatever you want in this article. If we missed a great Terraria mod, let us know below!