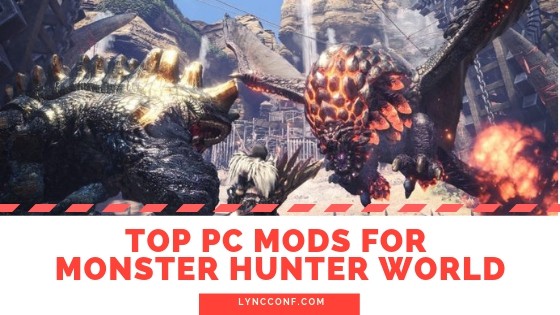 But with the sheer number of Monster Hunter World mods that are available (usually on the Monster Hunter World Nexus Mods website), how do you know which ones to choose? Not all of them will be helpful, and there may be some that help a lot more than you might’ve thought initially.

ALL Items in Shop 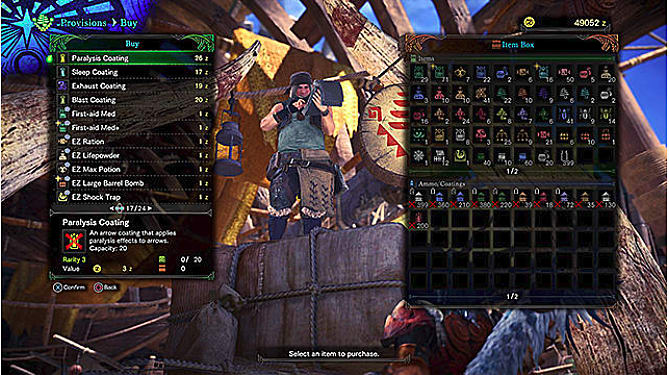 Yes, many consider this to be cheating, but if you aren’t one of them, you’ll love it. If you’ve gotten into the loop of killing monsters, getting better gear, then killing tougher monsters, you’ll quickly see that some of that “better gear” is very difficult to come by. Some items have extremely low drop rates, making them difficult to come by. The ALL Items in Shop is one of the most popular Monster Hunter World PC mods, and will add almost every decoration and crafting material to the in-game shop. As long as you can afford it, you can buy anything. You’ll still need to do quite a bit of hunting to get the money, so it doesn’t take away all of the fun of the game. 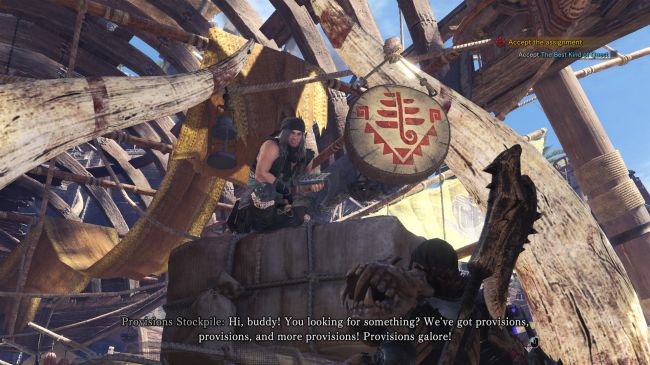 There are quite a lot of gamers that can’t really stand motion blur in games. It does result in motion sickness, but there’s no seemingly easy way to disable it in the game. Dirty Dan’s Blur-Be-Gone mod will allow you to disable the motion blur, as well as the vignetting effect that the depth of field causes. Note, however, that you can only use the Blur-Be-Gone mod together with Kaldaien’s Special K pack, which is next on our list of Monster Hunter mods. 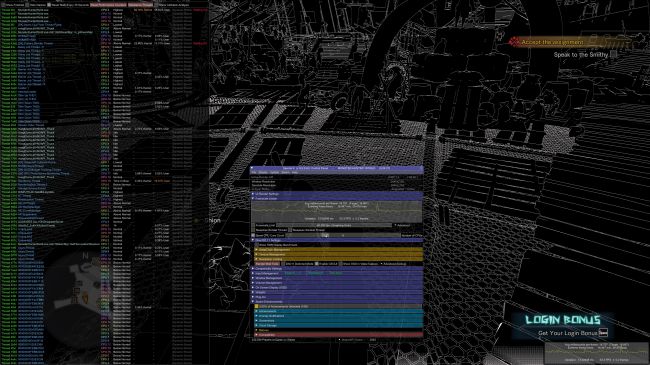 Shortly after Monster Hunter World was released, Kaldaien noticed that the game is very CPU hungry, and set out to fix that. The Special K mod pack will significantly reduce CPU usage, which may be helpful in some lower end machines. There’s also the ability to add enhanced ReShade options, as well as take HUD-less screenshots. Last but not least, it does help with some fullscreen problems. Granted, thanks to a few patches to the game, it’s not that essential anymore, but it is still very nice to have. It’s possibly the best Monster Hunter World performance mod as far as MHW PC mods go. 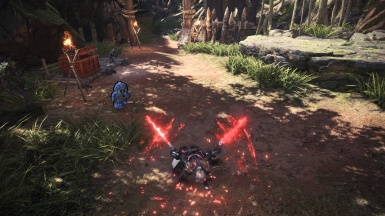 You could be playing MHW and be a massive Star Wars fan, and this mod would hit home for you. The mod will basically replace the Insect Glaive and the Dual Blade blades, and turn them into light sabers. And not only that, but the sounds and effects have also been modified, to make things even more realistic. Sure, you won’t be able to just cut things in half right away, but it’s a fun mod. 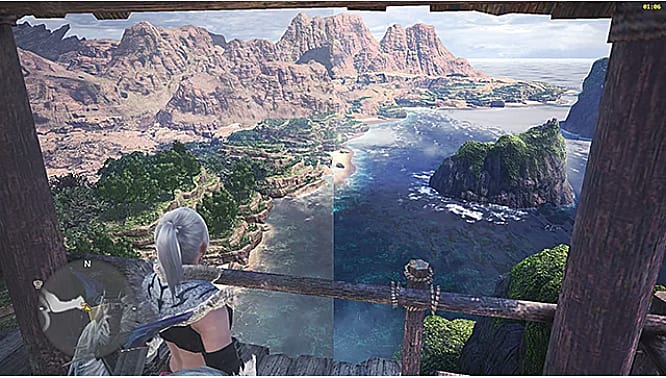 Even though the gameplay is really good, there are many people who noticed that the game looks somewhat washed out in terms of the color and depth. The Colorful ReShade mod aims to solve that, by adding some color and a bit of depth. This severely impacts how realistic the game looks. You’ll find water looking much more blue, fire is as red as it should be, the dynamic range is quite a bit better, and nothing feels overdone. If you want to add some pop to the game, this is the mod to do so. 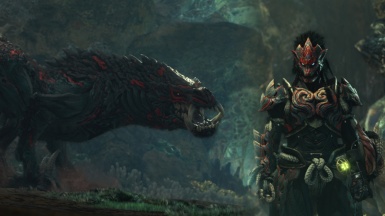 Odogaron is MHW’s “hell dog”. It’s quick, it’s aggressive, and it can kill you very easily. It does have a distinctive red look, that many feel doesn’t suit it too well. This mod will replace it with a black skin and red veins, making it look much more aggressive. The mod will also replace the male and female armor’s color style.

When you’re hunting a large monster, you often rely on your map to see how the beast may behave. However, there’s usually no indication on when the monster is weak before it’s near death. The Live Damage Meter solves this, and shows you the damage per player in a hunt, or in a quest. There are other similar mods, but they only provide DPS/DPM, as well as percentages, which is much less useful. 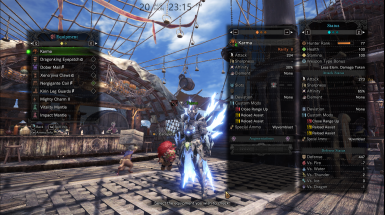 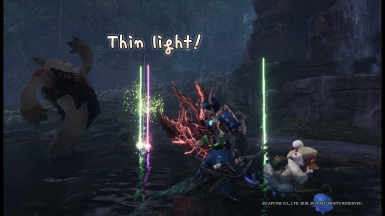 We already mentioned how difficult it is to find certain drops in the game. You may have killed five Deviljhos in one day, but you still can’t find the gem. You get a screen after the hunt that tells you a drop is nearby, but good luck finding it. The Light Pilar mod will create a highly visible light pillar on top of every drop, so you can easily find it. It’s truly a godsend. 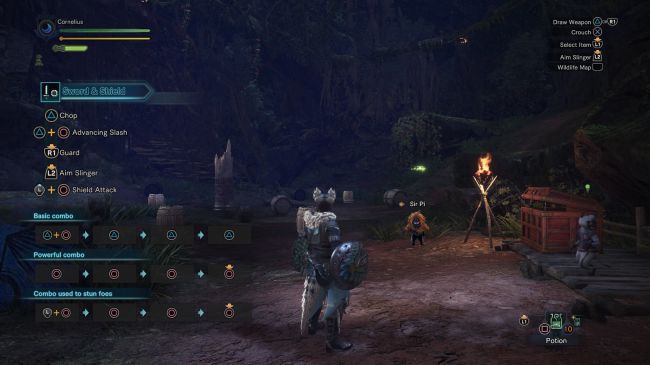 It’s no secret that many players prefer the DualShock 4 controller to Microsoft’s Xbox one. However, Monster Hunter World supports Xbox button prompts by default, which may be a bit disappointing. This mod will replace those prompts with the right ones for a DualShock 4 controller, making things a lot easier if that’s your controller of choice.

Thomas the Eater of Elder Dragons 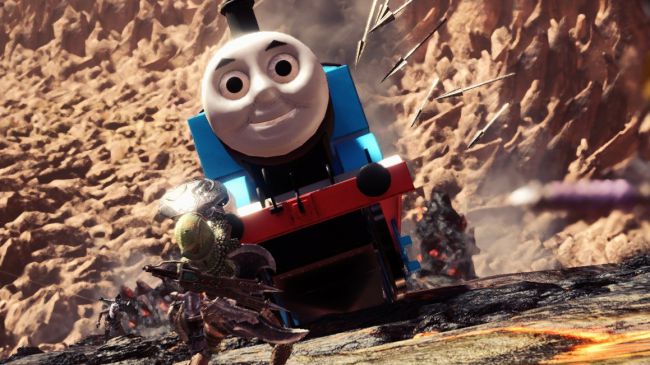 The Elder Dragon Nergigante is a fairly scary monster. But if you want to make things a lot more fun, this mod will replace it with Thomas The Tank Engine. You still get Nergigante’s hitboxes, and you can still cut the tail, although it’s invisible. This is one that’s purely for adding a comic touch to your game, but it does work really well. 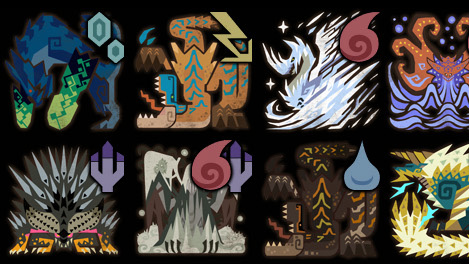 However, the mod requires you to fight a monster a few times before it can provide any information about that particular monster’s weaknesses. You can also go over your Hunter notes every time you need to look up a monster.

Also, this mod tells you what weapon to use for a specific monster and eliminates the need for notes. Do install this patch!

This mod creates an overlay that can tell you about a monster’s health along with the status of each one of its body parts. It will also show up a bar to tell you how close the monster is from being enraged.

With this overlay, you can track down the exact amount of damage your team members have faced. This makes it easier for your team to decide which member needs a bit of rest while you’re in a challenging battle.

You can also drag the widgets to any part of the screen at your convenience. They are customizable but keep in mind that this mod works best for the host player only.

The Lazy Aspect Fix mod won’t affect your gameplay though because it is free of risks. A lot of players find it tedious to mess around with aspect tools of the game. And so downloading and setting up this mod could make your life a lot easier and free of stress. 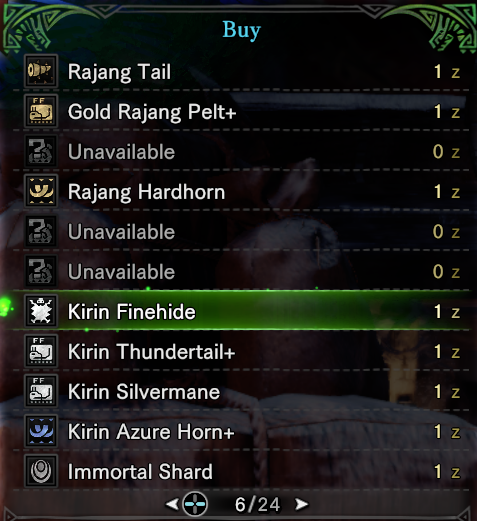 Monster Hunter World is a great game to play but one thing that discourages you from playing it is the steep cost of upgrades or other items. As you keep progressing in the game, these costs keep increasing.

The worst of these purchases are the armor upgrades. These costs can rise at an exponential rate. Such things can repel you from playing the game and often, the players don’t feel like continuing with the plot.

So, to reduce this grind and to make sure that you can get whatever you need, you should try out the 1 Zenny shop mod. This is an amazing mod that reduces the cost of almost everything to one zenny only. 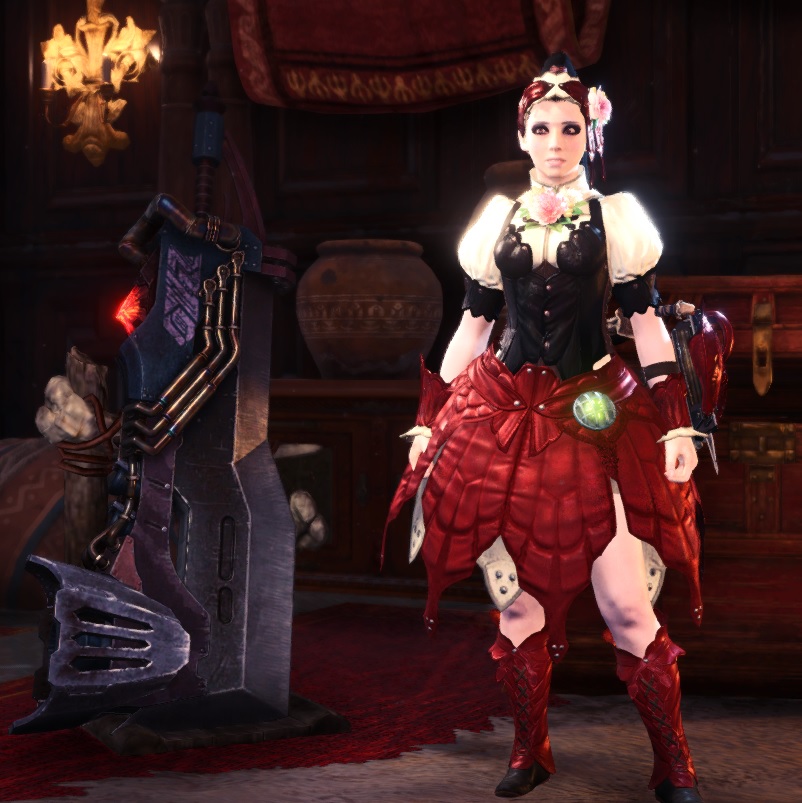 We are well aware of the fact that players are a bit concerned about the MHW transmog ban talks making rounds. Rest assured, because installing a transmog mod is risky but it hasn’t banned anybody.

With that being said, let’s come to the World of Transmog mod. This mod puts you in total control over your armor and you wouldn’t be losing anything for having that. You can also swap your armor for another without giving away the characteristics of the equipment.

However, it won’t work with all the items in the game and you need to find the files of weaponry yourself with the help of tutorials. 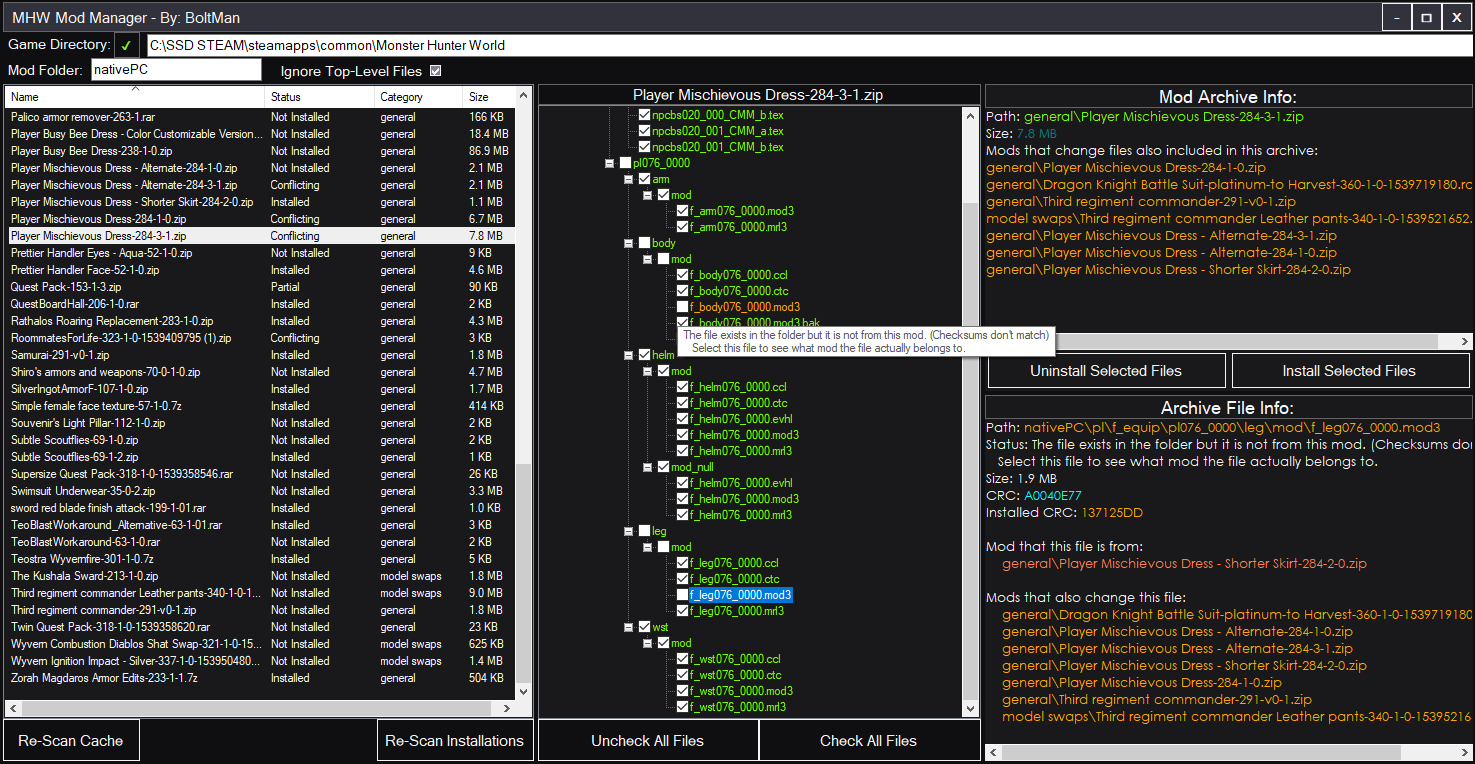 You might have had multiple mods installed with your game. And it is much likely that a couple of these have been clashing with each other. This is a serious issue because it can ruin your gaming experience.

But, you can avoid all that by installing an MHW mod manager. Organizing your mods can be a tedious task. Although, it is necessary to avoid rummaging through folders searching for the right mod to use.

The mod manager is a simple manager that will organize and uninstall mods that you don’t need. You better get it to save time on looking for mods and use it to fight more monsters.

Monster Hunter World is a fun game but it does have certain aspects that could use a bit of improvement. For example, the proper placement of non-playing characters (NPCs) could be really helpful.

It might feel dreary when you need to repeatedly travel from one place to another to trade in a bounty, then to somewhere else to craft something, and so on. But, getting the Extra NPCs in Astera Gathering Hub will ease out this process by placing the vital vendors and NPCs closer to you.

This involves regular relocation and it can work with several NPCs like Smithy, botanist, tailraider, captain, etc. We have to admit that this is one of the best MHW mods that makes your time in the game easier.

There’s a host of mods that are available for Monster Hunter World, which makes choosing which ones to go for a difficult ordeal. Some MHW addons will make the game better or easier, while others are simply cosmetic. Regardless of what you expect from the game, we hope to have covered all bases with our list of best MHW mods, and you’ll know what to do if you want to know how to mod Monster Hunter World.