The best keyboards for gaming are those that add a different flair to your desk, makes your gaming rig special and gives your gaming that extra edge it needs. Today we, at LyncConf, we have compiled a list of the top gaming keyboards with or without Numpad, wired and Wireless that will play as hard as you do, will never let you miss a side-strafe to dodge the bullet in time and pull out of the drift just before you go into a spin. 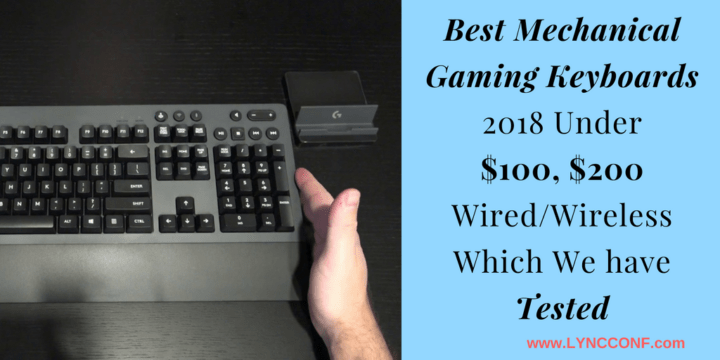 Like our search for best gaming mouse led us to conclude that wireless and gaming are not the best of friends; it works for keyboards as well. Except a few exceptionally well-built examples, there ain’t many keyboards that can boast gaming capabilities while working wirelessly. We tested a couple of those and there wasn’t one that could beat the Logitech G613. Despite the absence of backlighting being a big con, the other features were actually decent enough for us to enjoy a few hours of Diablo and Call of Duty: Black Ops 3.

The keys are Logitech built Romer-G mechanical ones which were effective in getting us out of a few tough corners in our quick half an hour Ghost Recon Future Soldier playthrough. Though the keys felt a little wobbly and didn’t feel as good under our fingers as we were expecting they would; due to the odd prints on the keycaps. At least, it had some nifty macro keys.

The comfortable wrist-rest is a great addition that a lot of keyboards fail to provide, it’s a shame that the wrist-rest is not removable. With a travel distance of only 3mm and a brilliant tactile response, G613 was better than most other keyboards. And the LIGHTSPEED wireless connectivity solution seems unbreakable – we tested the keyboard in the vicinity of 15 different wireless devices, each affecting the other to some extent. Our G613 didn’t drop the connection even once, never lagged behind our commands and though we are not sure it exactly ensures 1ms response time, it’s mild and quiet… which makes for a great typing experience as well. It has 18 months battery Life.

We name it as “Best gaming keyboard without Numpad”

Corsair has been a huge name in the gaming peripheral industry for quite some time. And for a very good reason – they make some to most effective, durable and great looking devices that we have seen. The K63 was a wired beast when it came to gaming. The Cherry MX keys and sturdy construction made it a gamer’s love. So, when wireless technology proved that they were up to the task, Corsair took their trusted weapon, the K63, and converted it into K63 Wireless – a keyboard that packed the same everything from it wired elder brother and added the ability to play from your couch when you PC and TV screen is across the room.

The biggest advantage over the G613 is probably the backlights – as it makes using the K63 in dark a viable option. The keys are very authentic Cherry MX, with the clicking action sounding very satisfying when we smashed a couple of Saxon armies playing as Franks in Total War Attila. (Sneak peek: A lot of total war stuff coming up. If you guys really want us to write about this awesome series or any other series, let us know in the comments and we will comply!)

Best Keyboards for some RGB madness Under $200

There is nothing that does RGB better than Chroma. Razer’s awesome innovation has a number of devices enabled with it and all of them are really good, good enough to be considered for a professional gaming setup. And this keyboard fits right in with the setup – joining in on the crazy craziness of 16.8 million colors worth of LED lighting. It has great mechanical keys that have exactly the right tactile feedback and perfect actuation force, with that satisfying click-y sound.

Razer’s gaming peripherals have never fallen short of our expectations. And this keyboard went ahead and exceeded that by having features we weren’t exactly ready to find on the keyboard. Using the keyboard is a very pleasant experience and it totally gives those Razer vibes during the usage time. How they managed to add the macro keys on it is anybody’s guess, but they are very responsive and conveniently placed.

The best part of the keyboard is how well it performs in every game we tested it with, despite being marketed as a must-have keyboard for MOBAs and MMOs.

“It is also one of quiet gaming keyboard.”

The name should suggest it straight away – this is a Corsair masterpiece with a lot of RGB lighting possibilities. Even though we loved the RGB of this keyboard, what actually caught our attention was the superb build quality – it felt so much more than a gaming peripheral. It is up there with the absolute best in terms of performance. It is a huge board and required some desk space management to fit, but once it did, it kept going no matter what we threw at it – Battlefield, Counter-Strike, Total War, Civilization, Stellaris, Dota 2 – nothing could beat its immaculate blazing fast responses and very accurate Cherry MX Brown keys. 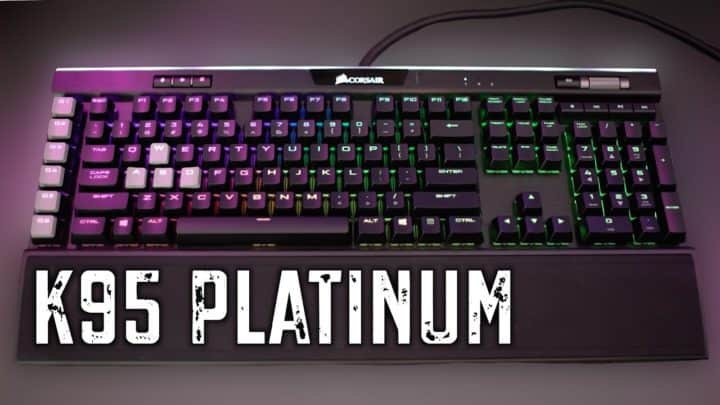 There’s so much on the K95 RGB Platinum; the metal volume wheel, the macro-keys, the media controls, the extra textured keycaps for WASD keys, and so on, that it would take a whole separate article to properly explain why you should have this keyboard.

Well, if nothing else convinced you, consider this – you can create your own lighting effect, with the plethora of colors creatable, and it is stored in the 8MB onboard storage so that you can take those lighting profiles with you anywhere you go.

Best Budget Gaming Keyboards for the key-mashers Under $100

The Batman players will be able to relate when I say that there are games which merely require you to keep pressing key combinations in continuous cycles. There are a number of titles that require players to make extensive use of their keyboards, and we tested a few to find out the best for those gamers who love giving their fingers and keyboards a good workout.

We have always heard that good things never come cheap. MasterSet MS120 begs to differ. From the relatively new name in gaming peripherals, Cooler Master, MasterSet MS120 comes as a combo of keyboard and mouse under $100! The mouse is extremely mediocre, good enough for a few rounds in Ghost Recon Wildlands, but doesn’t have the durability or the features for intense CS:GO matches.

“This is one of best gaming keyboard and mouse combo.”

But the keyboard is a different story altogether. It is what the company calls a “mechanical” keyboard. Which essentially means that despite being a membrane keyboard, it supports mechanical keyboard grade performance specs. We tested those claims, and it was surprisingly true. Never once it felt mushy like the normal membrane keyboards do, didn’t ever have a lost key-press, or input delay. The action was very agile, smooth and it definitely oozed quality. And with the RGB spectrum glowing all across the board, we simply felt the need to buy it off our test-equipment provider for our use, permanently.

We had our reservations about the mouse, but after using the keyboard we didn’t think we could live without using one of these for quite some time – it is called getting comfortable with something. 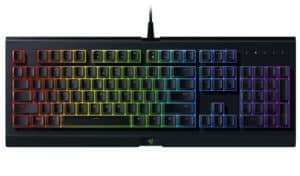 Razer couldn’t have built a more cheap gaming keyboard that is not made out aircraft-quality alloys. This plastic-y bare-on-features keyboard will serve all your long key mashing gaming sessions with its wonderfully built “mecha-membrane” keys. It is indeed a membrane keyboard, but due to how Razer made it, it gives almost exactly the performance of mechanical keyboards, and if you can ignore the high price for a membrane keyboard, it will be a perfect RGB partner for a long time… irrespective of how much you love Batman: Arkham Knight. 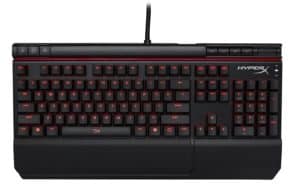 The Alloy Elite is a very durable and completely mechanical alternative to the Ornata Chroma. The lack of programmable macros are a definite loss, but it makes up for that with nice backlights, very durable components and a nice few buttons for media control and other stuff. The wrist rest is a definite plus, and we can appreciate the differently modeled WASD keys for better gameplay experience. Our testing proved its worth as a competent Assassin’s Creed dominating keyboard, though we came across certain problems with pressing a few special key sequences or combos as they are called due to the key contours. It definitely doesn’t make it a bad choice; it could be my own problem since my fingers are used to the lovely SteelSeries keyboards I use.

Best Gaming Keyboards for everything and anything 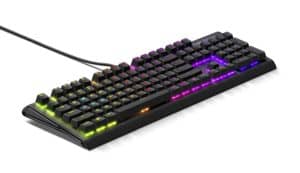 Built from aerospace grade aluminum (5000 series alloy), the Apex M750 is built like a tank. The QX2 keys are a personal favorite of mine and the RGB illumination is one of the best I have seen. The game specific, or color coordinated, or beautifully animated, illumination modes are useful, precise and extremely soothing to the eye wearing glasses.

The Apex M750 has ImageSync feature which effectively converts a simple image into RGB illumination. This example is called Flavortown from SteelSeries’ own website.

With SteelSeries Engine 3, the possibilities are endless – and, the eSports players love this keyboard. More reason to have one for yourself!

Anything I write about this keyboard will be in vain, because you’re going to go ahead and buy it once you see the picture, without even caring for what I have written. It will be okay though – you will have gotten yourself what we found out to be the BEST keyboard we could find. Gaming was a fun thing using it, and unlike most others in this list, it actually felt incredibly at home when we went ahead and used it for some programming, for some novel typing and even for some daily stuff. We loved it!

If usefulness is left aside for a little, we can spend some time admiring the gorgeous keyboard – its sci-fi looks are wonderfully complemented by the custom mechanical keys and the super-stylish volume control knob.

I will let the readers decide if they want to pay a little more and get this masterpiece or be stuck with some standard generic keyboard. Honestly, we tested quite a few Roccat products, and trust us when we say that there are almost no competition to these superb devices… yes devices, not peripherals.

A little crazy, a lot of potential and amazing features define what Mad Catz is all about. Their products are the strangest I’ve come across, and yet they are the best at what they do. Like the S.T.R.I.K.E. 4 – it games, and it games hard. You literally cannot over-game in this keyboard; it will outlast any game you own, any PC you build, any number of gaming sessions… It is built to withstand.

So, How to choose the Best Gaming Keyboard?

If you just read the whole list and realized you still can’t decide, consider following this very short and effective guide.

So? What are you waiting for? Go get yourself the best gaming weapon and let us know which one you chose.