The Witcher is one of the most well-known RPG series of all time. All 3 games have been loved by the gaming community for great reasons: Amazing characters and story, great gameplay, and a believable world. And the latest entry, The Witcher 3, is no different.

When it came out, The Witcher 3 took the gaming industry by storm. An amazing story, living characters, an astonishing and huge world, fun quests, and great gameplay combined to form one of the best video games to date. Even though it was close to being perfect, we cannot say that there weren’t small areas that were open to improvement. And as always, modding communities are here just for that, to tweak the game and to create a lot of crazy, unneeded-but-fun mods. So we decided to put together some of the best The Witcher 3 mods for you. You can also check games like Witcher 3.

How to Install Witcher 3 Mods

If you do not want to deal with Nexus Mod Manager, you are in luck since installing The Witcher 3 mods manually is really easy.

1. Find the installation path of your game. For Steam users, it should be C:\Program Files\(x86)\Steam\steamapps\common\The Witcher 3.
2. In there, create a new folder and name it “mods”.
3. Place your mod’s file inside the newly created “mods” folder. Be sure it is just one big folder instead of multiple different folders.

First and foremost, you need Nexus Mod Manager if you are planning on modding The Witcher 3. Since all of the mods are in Nexus, this tool makes it a lot easier to download, install, update and manage your mods. Some mods can be incompatible with each other or may require certain installing orders, and this software makes it all easier.

Like the first one, this is one is another must. It enables you to use the debug console to use hundreds of different console commands to fix stuff and do various different tasks like changing settings, freezing time or spawning enemies to take cool videos or screenshots.

While The Witcher 3 has a great combat, it can get repetitive after hundreds of hours of gameplay -like every game- and even on the hardest difficulty, you can master it pretty quickly. This mod makes each encounter much more exciting and challenging: enemies are smarter and faster and do different attacks as they level up instead of just hitting harder. Perfect for a second playthrough and can even be great for your first time if you love challenging combat.

As its name suggests, AutoLoot does the looting for you after each fight and you can customize what you want to loot from your enemies’ bodies with filters. It also does not steal while auto-looting, so you do not have to worry.

The Witcher 3 has great graphics and lighting but for optimization sake, developers did not add shadows to every light source. This mod adds shadows to every light source you can imagine: torches on walls, torches that guards carry, large braziers in cities, candles, lamps and also tweaks shadow fade and autohide distances for all adjusted light sources. If you have a strong PC, this is one of the best mods to improve immersion.

The Witcher 3 is an adult game from every perspective: brutal combat, grown-up characters and adult themes in its characters’ relationships. What it lacks is more blood. If you like gore like me in your melee combat, More Blood adds different blood trails for different enemy types and now Geralt can be covered in blood. Like the creator of this mod says it, “Tarantino Directors Cut”. Combine this with mod below, and you are in for a more cinematic combat.

This mod slows time every time Geralt lands a critical strike on an enemy, adding a more cinematic feeling to combat and making each critical hit feel more satisfying. Not a huge change, but definitely makes combat more fun.

This mod reworks the textures and models to higher resolutions and brightness. It improves a lot of environmental textures like stones, rocks, bricks, roofs, walls etc. and adds new reflections and effects on water. It does not change the art style but even though it is optimized well to not cause any unnecessary VRAM losses, it can still add quite a bit of extra load on your computer so be sure that you have a strong PC.

This is one of the biggest mods for this game. It completely reforms the combat in many areas with the aim of increasing realism and immersion while not ruining the fun. It removes auto-targeting, so you can attack your enemies from all angles and Gerald attacks where you point him to. Dodging does not make you invulnerable anymore, there are 2 new attacks, being the kick and a new heavy attack, you can jump in combat etc. You can check the full list on the mod page below. It is perfect for a new playthrough.

This overhaul mod changes and rebalances a lot of stuff without taking away from the vanilla experience. The list is extremely long so you can check it on the mod page but some of the important changes are: quests levels and rewards are reworked, a lot of textual inconsistencies and typos are fixed, new damage formula and combat changes, reworked economy and ranged combat, difficulties are reworked etc. You can use it with an existing save file but it changes so much that it deserves its own playthrough.

Developed by a senior gameplay designer at CD Projekt Red, this mod doesn’t aim for any deep and intrusive changes like Ghost Mode or Enhanced Edition, instead, it is meant to maintain original feeling of the game, sometimes going closer to the original intention behind the designs. It focuses mainly on fixing immersion breakers, buffing underperforming skills and items, cosmetic changes and bug fixing. It rebalances some stuff and makes the world more dangerous. If you want small changes that won’t change your gameplay but will improve your experience, FCR3 is your mod.

Another mod that describes what it does on its name perfectly. This mod increases your draw distance (duh). Since the world is huge and sometimes you can find yourself in wide open areas, the default maximum draw distance can seem a little bit underwhelming. Of course, this was done to optimize the game better, but if you have a monster PC, you can install this mod to see a lot more details in the faraway lands.

This mod changes the way different weather conditions look like and adds extra weathers to all of the regions. It adds more snow weather to Skellige, adds foggy weathers to every region of the game, changes the way rain and storm look like and some other minor tweaks. It requires Blood and Wine expansion to work, but if you do not have that awesome DLC already, you should go and buy it before even attempting to mod the vanilla game.

This is one of my personal mods; it doesn’t change a lot but it certainly adds a new layer of atmosphere by small tweaks. It rebalances the colors and removes the blue tint from the game and saturates most colors. Bloom effects are more expressive and interior lighting is better. All of these combine to create a more fantasy-like look which suits the game better in my opinion. 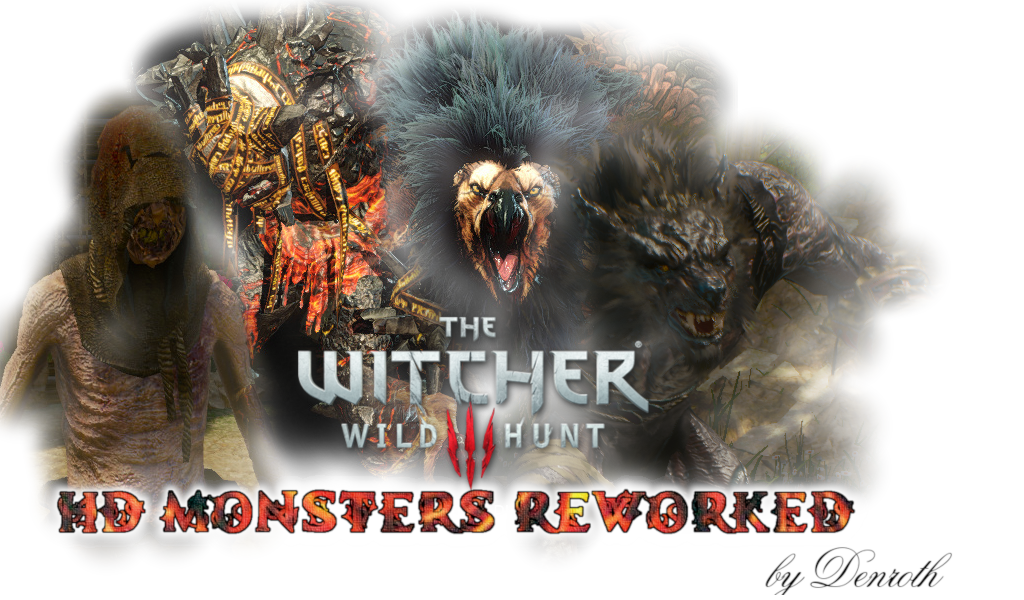 Let’s face it, part of the reason why we love Witcher 3 is because of the generous sprinkling of horror elements. It would not be the same if not for the countless monsters. So while we’re reworking the entire game in HD, why not give some special attention to our beloved beasts?

This mod is a complete overhaul of the monsters in the game, improving on more than 1000 textures. Just the boost in visual quality itself adds much more detail to the creatures, and it makes encounters with them all the more thrilling. 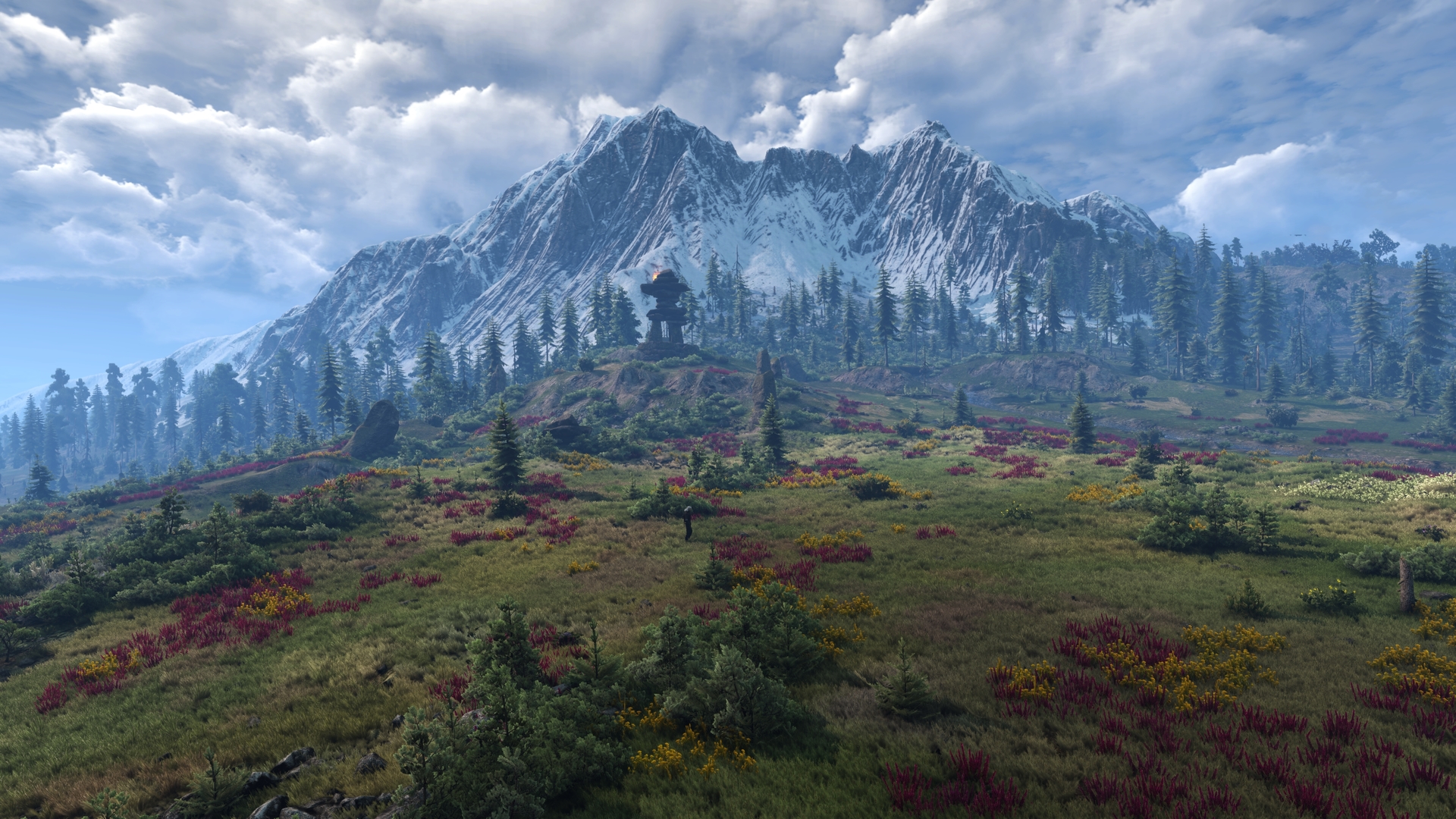 You’ll always find mods that try to improve upon the visual element of water, making it look hyper-realistic. Here’s an unpopular opinion: it’s far more important that the grass looks realistic, since you’re spending more time on land than water. Did you know that the human eye is capable of seeing more shades of green than any other color? That’s why getting the Smooth Grass mod will definitely bump up the immersive game experience.

There’s a lot of variation in the kinds of grass you’ll walk on: different hues depending on the setting, but they’re much denser than the vanilla game grass. 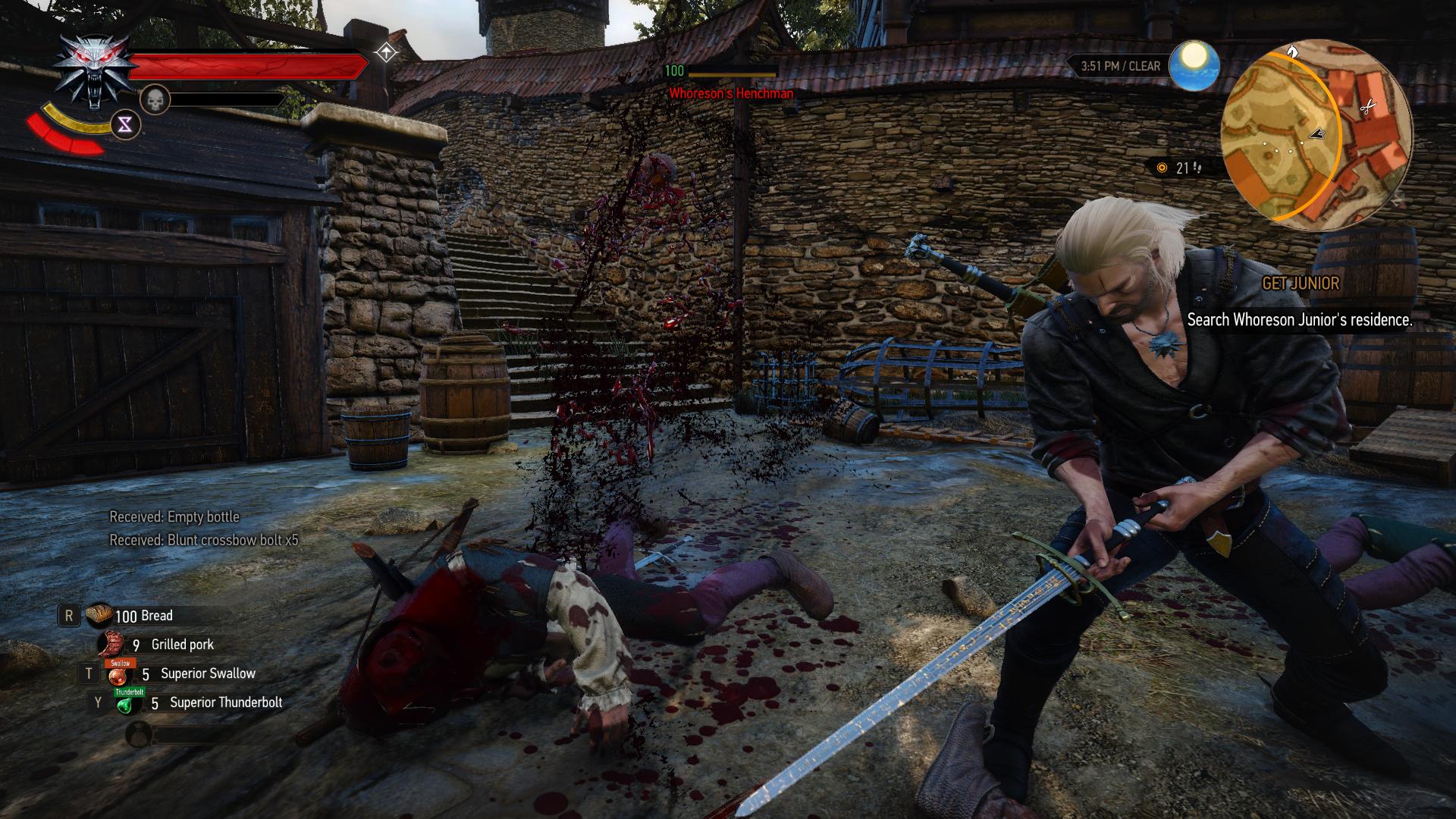 If you’ve downloaded and installed the More Blood mod, this one goes really well with it. While it doesn’t increase the volume of the blood itself, it retextures it. That means that blood is loosened up and has a better ‘spray’ effect during death of any of the characters. The pool of blood that forms around any dead body is also improved to look much more realistic.

There’s nothing more off-putting than fake looking blood, it can really kill your experience and make you think of ketchup. This mod interestingly also retextures the effect of blood puddle effect which is what happens when an enemy is killed in water. The blood mingling with water has been retextured to look hyper-realistic! 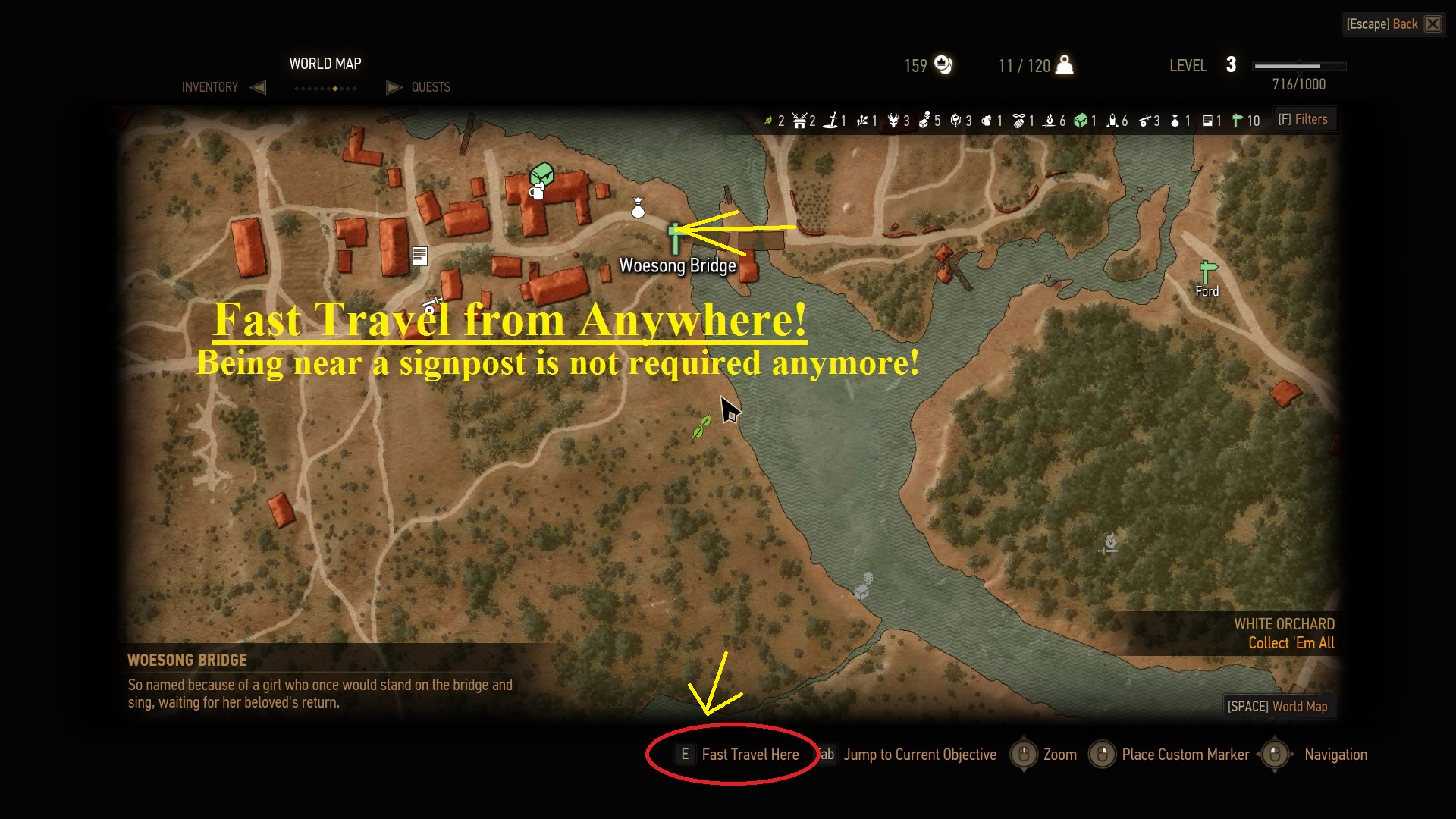 One thing’s common about video games and real-life: transporting from one place to another is a lot of filler time and we all wish we could eliminate it. This mod can’t do anything about your daily 2 hour commute to work but can ensure that your character spends less time travelling, more time slaying monsters.

In this mod, you don’t need to be near a signpost anymore to be able to fast travel. You can do it at any point in the game, however far away you are from a signpost. The only warning that the modder issues is to not fast travel when you’re in a quest: because the game explicitly tells you not to. This can interfere with the game’s performance.

There you have it, some of the best The Witcher 3 mods to improve graphics, visual effects, balancing, combat, and a few that completely overhaul the game. While the overhauls require new playthroughs and deliver a fresh experience, the others can be implemented to your existing save files to tweak minor stuff without any problems. Whatever you would like to change, there is probably a mod for it since the modding community for TW3 is quite big. If you enjoyed one of the mods listed here or think that we missed a great one, let us know below!